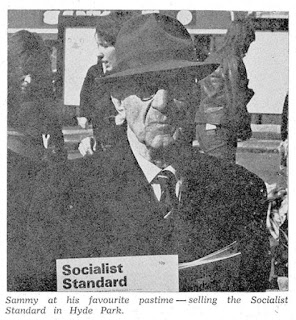 The death took place on 17th February of our old comrade Sammy Highams. He was 80.

Sammy joined the East London branch of the Party in 1928. Later he was in Hackney branch, and after it closed a few years ago he transferred to Camden. He was a ship’s carpenter and travelled widely, and was in Canada for some years. An active and lively-minded man, he had several interests. He was a keen trade-unionist; he studied French and made visits to France; in his mid-seventies he still went swimming regularly. He was a prolific letter-writer to newspapers, and also wrote to engage politicians and academics in arguments about statements they made.

Sammy’s chief Party activity was selling the Socialist Standard, and he did this with unflagging zeal until a short time before his death. He attended demonstrations, travelled to political parties’ conferences, stood at street-corners and in the London School of Economics, and was often remarkably successful.

He will be remembered by many members — and opponents — as a choleric man. He castigated members for not equalling his efforts with the Socialist Standard, and voiced his boredom when branch-room discussions went on too long for him. In arguments in Hyde Park, he flourished his umbrella alarmingly; and he made an impression on a “Right to Work” demonstration two years ago by shouting alongside it “What about the right to be lazy?” Those who knew him more closely, however, were well aware of his warm and kindly nature. His work for the socialist cause will certainly be missed; so will his person be, by a lot of us.