Who is Mao Tse-Tung? 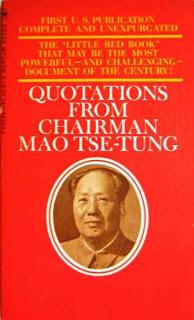 The Thoughts of Chairman Mao (“The Little Red Book”). This Chinese Bible contains extracts from Mao’s voluminous writings. There are quotes from his early works written when as a guerrilla leader, Mao (and his Red Army) were such a thorn in the side of the Chiang-Kai-Shek regime, right through to the 1960’s. Now Mao’s ideas are so influential in China that they actually do serve as the equivalent of religious dogma. Perhaps when Mao does die, he will be made the first communist saint. His position after the cultural revolution was so secure that he was able to bump off his supposed successor Lin Piao (not to mention poor old Confucius). When the veneer of rhetoric is stripped away what has Mao done and said?
The first point to make is that Mao Tse-Tung has led a backward economy along the harsh road of advanced capitalism. He has also led the Chinese development into a military power to be reckoned with. We are not saying that there is not less famine now than before 1949, or that Mao’s regime is more (or less) oppressive than the previous one, or that technical advances have not been made. But at what cost in terms of human suffering. As Marx graphically put in Volume 1 of Capital:

“Capital is dead labour that vampire-like only lives by sucking living labour and lives the more, the more labour it sucks.” (p.233, Lawrence and Wishart edition.)

Apart from their other characteristics, the outstanding thing about China’s 600 million people is that they are “poor and blank”. This may seem a bad thing, but in reality it is a good thing (p. 36 — our emphasis).

It must be such a comfort for the poverty-stricken Chinese to know their leader thinks it is good for them to be poor. Mao does not make it clear that he thinks it is good for the leaders to be poor!
So far as one can tell the Little Red Book is compulsory learning in China. Indeed the introduction in the edition still being circulated over here (ironically by the disgraced Lin Piao) makes it clear that the workers should commit the book to memory in order that Mao’s guidance can help them in their daily problems. The book proves beyond doubt our contention that nothing but capitalism is being developed in China:

The spontaneous forces of capitalism have been steadily growing in the countryside in recent years, with new rich peasants springing up everywhere and many well-to-do middle peasants striving to become rich peasants. On the other hand, many poor peasants are still living in poverty, (p.33—a passage written in 1955)

Mind you, even on basis of trying to develop capitalism, Mao’s book is full of meaningless twaddle. What sort of guidance do you think the production teams on the Chinese factory floor get from the following:

“Grasp firmly.” That is to say, the Party committee must not merely “grasp”, but must “grasp firmly”, its main task. One can get a grip on something only when it is grasped firmly, without the slightest slackening. Not to grasp firmly is not to grasp at all. Naturally, one cannot get a grip on something with an open hand. When the hand is clenched as if grasping something but is not clenched tightly, there is still no grip . . . It will not do to have no grasp at all, nor will it do if the grasp is not firm, (p.111)

Secondly, Mao has been largely responsible for the giant confidence trick that has been so successfully played on the Chinese workers. By using phrases referring to common ownership, “Marxism”, and that contradiction “Marxism-Leninism”, he has duped large sections of the working class, both in and out of China, into thinking that Socialism is being established there. The merest glance at the Little Red Book will suffice to show how far Mao is from an understanding of either Marx or Socialism.
For example, Mao thinks that capitalism in Russia has been overthrown. He says that in Russia capitalism is a “museum piece”, (p.23) One can only wonder how this “Marxist” reconciles the existence of a wages system in Russia with Marx’s revolutionary call in Wages Price and Profit for the “abolition of the wages system.” He has even got the cheek to repeat that wretched reformist call for women to be paid equal wages to men (see page 197). He implicitly admits that women are not paid the same as men in China (and see also Socialist Standard November 1974). Women’s Lib fans of Mao, please note.
The whole principle of leadership is abhorrent to the Socialist. Socialism cannot be brought about by leaders but only by the democratic conscious actions of the workers themselves. Mao is firmly wedded to the idea of leadership and, one must assume, the benefits that go with it. He has after all been the chief leader since 1949 and the Little Red Book is riddled with statements about the importance of leadership (see for example at p.106 with his talk of “squad leaders”. ) Incidentally the book also points out that in 1958 only 10 million out of a population of 600 million were members of the Chinese Communist Party. Is it that the other 590 million don’t want to join or that they are not allowed to join?
In order to ensure that the workers are kept down. Mao can’t resist urging on them abstinence and sacrifice:

To make China rich and strong needs several decades of intense effort, which will include, among other things, the effort to practise strict economy and combat waste i.e. the policy of building up our country through diligence and frugality, (p.186)

If those words had been spoken by Wilson or Heath in crisis-ridden Britain you would not have been surprised.
The similarity between Mao and other capitalist politicians is so striking as to make one rub one’s eyes in disbelief at the sight of people in the West waving banners with Mao’s picture on them and proudly calling themselves “Maoists”. Mao is just as much an anti-Socialist as his one-time hero Stalin was. They both have in common the fact that they successfully exercised a dictatorship over the proletariat in their own country. When workers throughout the world learn to examine the contents of the packet and refuse just to accept the label, the fraud of Mao Tse-Tung will also be a “Museum piece”.
Ronnie Warrington