Who Needs Money? by Herbert Lomas (Blond and Briggs, 1972) 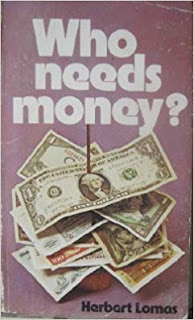 A moneyless society is so obvious a suggestion for this age of potential abundance that it is not surprising that people should come to realize this quite independently of the activity of Socialists. Herbert Lomas is one such person. His argument for replacing capitalism by what he calls “a planned moneyless society” is simple (too simple in fact):

Our problem is abundance. The Law of Supply and Demand, when used to make a profit — as it inevitably is in a continuing money economy — gives the rich an investment in the poverty of the community. Simply stated, the Law tells us that if goods are short, prices are high. If goods are in abundant supply, prices are low. In this way the productive powers of our society are opposed to the interests of sellers. And so the productive powers of the world are systematically sabotaged in the ways indicated in this book. Most of the instances are well known already. What is not well known is their rationale for it, or if known its full implications are not allowed to come home. What is not well known is that the productive potential of the world can be released by removing the money system, for then the inherent conflict between wealth and profit will be dissolved. No one will have an interest in creating dearth.

In other words, technology, if not restricted by the money system, could provide goods and services in such abundance that their price would be nil, so they could be given away free. But certain people, the rich — and Lomas produces figures to show how they own most of the wealth and draw most of the unearned income in Britain — have a vested interest in preventing abundance since only in conditions of scarcity can they make profits. If goods were abundant, prices would be nil — and so would profits. So the rich seek to prevent abundance and maintain scarcity by all sorts of artificial methods: wars and preparations for war, planned obsolescence, not automating, overpopulation, etc. The unleashing of modern technology, says Lomas, would not only allow goods and services to be given away free; it would also allow the abolition of toil. With machines as their slaves people could lead a life of leisure and creative activity.

Lomas’ style — a hundred-page paperback, easy to read and full of quips — shows that it wasn’t his intention to write a theoretical treatise, but rather to appeal to people’s imagination, to get them to consider the possibility of a world without money. Nevertheless, his economics is a little shaky. It is inadequate to explain money, prices, profits, etc purely in terms of supply and demand. The price of a commodity is related, however indirectly, to the amount of socially necessary labour time spent in producing it and profits are made from the unpaid labour of the producers not from charging high prices. But Lomas is right in seeing that developments in modem technology now mean that a moneyless society in which people’s needs are fully satisfied is possible. He is also right to see that it can never materialize under capitalism. As technology advances, capitalism becomes increasingly a system of artificial scarcity and organized waste.

But Socialism won’t evolve automatically or gradually out of capitalism. Its establishment requires a decisive break — a political and social revolution — that will replace class ownership by social ownership. This brings us to the really weak part of Lomas’ book: his views on how to achieve a planned moneyless society. First, he sees it as being possible in one country (a section of the book is devoting to arguing how Britain could do without imports), but this is absurd: the means of production that make possible plenty for all are world-wide and trans-national so any change from capitalism that will harness them to serve human needs must be on a world scale. Second, Lomas sees his moneyless society being introduced gradually via a transition period during which people would be paid not to work. This wouldn’t work either because it presupposes that the community is already in control of the means of production, but if they are why would they not establish a moneyless society straightaway?