Book Review: The Streets of London 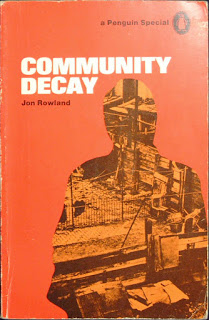 Community Decay. By Jon Rowland. Penguin Special, 50p.
This rather slim volume consists of a general essay on the subject followed by a case study of the area of North London between Hornsey Rise and the Archway (very near where this reviewer lives).
The introductory section is, as Rowland admits, written at a very high level of generalization. Its vagueness is reinforced by the use of undefined terms such as “worker” or “middle class”, with the latter group, it seems, almost being regarded as the villains of the piece. Nevertheless, there is some valuable material here, for instance on alienation, which Rowland sees as “a manner of living by which a person experiences himself as an outsider”, and on the all-pervading depersonalization of the money system. At one point Rowland speaks of “a potential abundance of hardware”, adding that “we may be paid a salary not to work”! And he makes a point of major importance when he concludes that “poverty” is more than just lack of money and cannot be solved by a mere redistribution of wealth, since this “does not necessarily remove the specific frustrations of the environment.”
The area of Upper Holloway studied in the second part of the book has now deteriorated into streets lined with yards of corrugated iron punctuated here and there by dismal-looking houses. Rowland first presents an economic survey of families living there; through all the graphs and figures there emerges an appalling picture of a depressed urban area, of overcrowding, poor sanitation and high unemployment. For example, 30 per cent, of all households (note: not wage-earners) had an income lower than £17. The worst hit families were found to be those who had lived in the area for less than five or for more than twenty years. In particular, the latter were especially badly off concerning hygiene requirements, with a mere 13 per cent, of them having the luxury of an inside toilet. An interview with the headmaster of a local school completes the picture of hopelessness and apathy.
In the last chapter Rowland draws his conclusions and makes some suggestions, which mainly consist of a radical decentralization of local government and greater participation by all the inhabitants of an area in local decision-making. His main source of error is revealed when he says that the vast urban conglomeration was “man’s choice of the way he was to live.” Surely this is precisely what it wasn’t—huge cities like London were forced on the vast majority of their inhabitants, the working class, by the demands of growing capitalism, and it is the unplanned and unplannable anarchy of the profit system which maintains them in their present inhuman condition. The small cells advocated by Rowland would have to work within this same framework, so it is hard to see how they could do much to improve working-class conditions. It is a pity that Rowland does not develop the theme of abundance which he mentions once or twice in passing, since the only way to solve the problems described in this book is within the democratic society of abundance which Socialism will be.
Paul Bennett