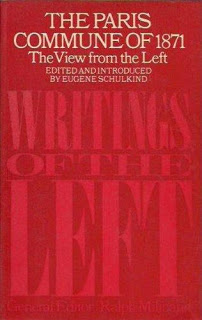 This is another telling of the heart-rending story of what went in in the working class arrondisements of Paris in the spring of 1871. It is presented as a series of pronouncements, many of which were made by the communards, and it must be commended as, at the least, a useful addition to the research and documentation of the event.

“The Commune was not socialist; it wasn’t even revolutionary.” Many of its declarations are but conventional objections to monarchism, pawn-brokers, mortgages, priests and so on mixed up, as is the case today, with rent strikes and wage rates. Gleams of clearer understanding shine through the fog: “It is necessary, citizens, to eliminate wage-labour, the last form of servitude,” and. “Brothers in the Army, you were workers yesterday and will be workers again tomorrow.” The men who spoke in such language displayed a degree of comprehension which is, sadly, seldom shown by “leaders” who are put up to speak on behalf of the workers a hundred years later.

Predictably, appeals to the army had no effect. Marx’s fear that lack of preparation (education) among the working class, including soldiers, would lead to defeat was only too awfully realised when Thiers, and his “cabal of place-hunting barristers”, loosed on to the citizens the mercenary army, which they had bought out of Prussian captivity for this purpose. Horror-stricken, The Times reported that the frenzy of slaughter has rarely been equalled in civilised society.

Marx is represented by his Civil War in France, and by his letter to Nieuwenhuis of 22 Feb. 1881 and, as always, he rewards re-reading with further interest. Penetrating comment is to be found, of course, in passages from Engels. Lenin provides the longest contribution from one pen; with Trotsky he brings the study to a conclusion, fittingly, perhaps ?