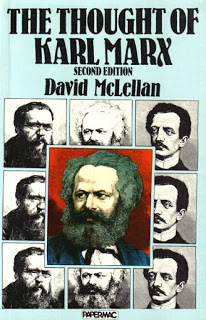 The Thought of Karl Marx, by David McLellan. Papermac. £1.50.
Despite the over emphasis on the philosophical and Hegelian aspects of Marx’s thought, this is a good introduction to his writings which also provides convenient translations of passages from some of Marx’s less accessible works.
McLellan, as a professional political philosopher himself, is naturally more interested in Marx the philosopher than Marx the economist. True, Marx wasn’t an economist pure and simple. He was a Socialist too and regarded economics as merely the study of the production and distribution of wealth under capitalism. True also, he employed Hegelian language and concepts to put over his views on capitalism and Socialism. As Lassalle put it, Marx was “a Hegel turned economist and a Ricardo turned socialist”. But all this does not alter the fact that his most important writing was Volume I of Capital, not the Grundrisse or the Paris Manuscripts. This was the longest of his writings he himself saw to publication, and it is essentially a book about economics.
McLellan is clearly out of his depth when it comes to economics and his discussion of Capital is one of the weakest parts of this book. His discussion of “future communist society” is weak too, despite his realising that for Marx this was to be an international, stateless, moneyless society. But he does give sensible explanations of the Jewish Question and the dispute with the anarchist Bakunin. McLellan also points out that Marx thought the workers’ party “should be a democratic, open organisation guided by decisions taken by majority vote at annual congresses”; that the phrase “dictatorship of the proletariat” was “seldom used by Marx and never in documents for publication”; and that “Marx never claimed that the proletariat would become immiserised in any absolute sense”.
One of the passages McLellan has found about Marx’s views on the possibility of the peaceful abolition of capitalism reads:

A historical development can only remain ‘peaceful’ so long as it is not opposed by the violence of those who wield power in society at that time. If in England or the United States, for example, the working class were to gain a majority in Parliament or Congress, then it could by legal means set aside the laws and structures that stood in its way (quoted p. 201, from the East German edition of Marx and Engels Werke, Vol. XXXIV, p. 498).

Marx, however, still believed that such a peaceful take-over of political power might later be opposed by a “slaveholders’ revolt”.
Adam Buick