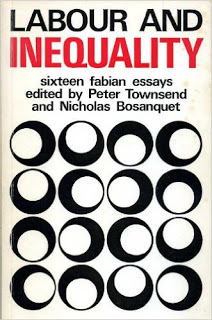 Labour and Inequality. Sixteen Fabian essays. Edited by Peter Townsend and Nicholas Bosanquet. Hardback £3.50, Paperback £2.20.
There have been four periods of Labour government in this country—1923-4, 1929-31, 1945-51, and 1964-70.
Each one has ended with internal dissension and disappointment, and rejection by the electorate, and each has been followed by inquests to find out what went wrong and proposals to do better next time. For some groups in the Labour Party the explanation is always the simple one that they had the wrong leader. This book does not belong in that category. It is a detailed examination by sixteen “experts”, often a highly complicated technical examination, of Labour government policies in different fields, the effects of those policies and in general their failure to produce the results expected. The essays are grouped under three main headings: The Social Services; Inequality in Income, Wealth and Status; and Human Rights and Social Planning.
The editors admit that this book will not bring much joy to members of the Labour Party:-

In many ways this is a critical book. While noting the achievements, most of the authors have failed to find evidence of marked changes in the direction of fulfilling socialist objectives. Their analyses present a gloomy picture. They confirm the inability of the government to use its power on behalf of the weaker members of the community.

Of course when the authors write of the Labour Party’s “socialist objectives” they do not at all mean the abolition of capitalism and the establishment of Socialism. What they have in mind is broadly the promise to eliminate extreme poverty and secure a greater degree of equality which featured in the Labour Party’s declaration of policy adopted forty four years ago (Labour and the New Social Order, 1918).
That 1918 declaration is of particular interest because it placed on record the Labour Party’s determination to deal with the inequality of wealth ownership. It referred to “the one-tenth of the population which owns nine-tenths of the riches of the United Kingdom”, and promised a “revolution in national finance” to remedy it. The present book examines what the last Labour government did about wealth ownership. The author is Michael Meacher, member of Parliament for Oldham West and formerly lecturer in social administration at York University and the LSE.
He quotes what he says has been a widely accepted estimate of less unequal wealth ownership, and refers to the belief that inequality is on the decline, commenting “Both assumptions are open to extreme doubt”.
He examines several calculations of wealth ownership and argues that they are seriously inaccurate because, among other reasons, they do not allow for the extensive evasion of estate duties payable on death—“Capital has not been taxed away, it has been hidden away”.
Of various methods of estimating the degree of inequality of ownership he thinks that used by the Economist is “perhaps more reliable”. This estimate, related to the year 1959-60, showed one per cent of taxpayers owning 40 per cent of total wealth, two per cent owning 55 per cent, and seven per cent owning 84 per cent. “Indeed the richest tenth of one per cent was actually found to own 13 per cent of total wealth, a sum of £7,033 millions, representing an average fortune of rather over one-third of a million each”.
While not in exactly the same form as the 1918 figures it is clear that little if any change has occurred in half a century and Meacher doubts if any change is going on now.
Two indications of the uselessness of Labour attempts to improve capitalism are mentioned in the book: male unemployment doubled under the last Labour government and in April 1970 5 per cent of men and 55 per cent of women had earnings under £15 per week.
The book quotes from a statement made in 1934 by the late Professor Tawney about “the degeneration of Socialist parties on assuming office” (by “Socialist” he of course meant Labour). He meant their failure to carry out their declared intentions. About the same time the leader of the Labour Party, Clement Attlee, in his book The Will and the Way to Socialism, claimed that the Labour Party believed in “the abolition of classes and in an equalitarian society”. He explained clearly what he meant by equality. Under Labour government there would be “no little cottages and no large private houses. All would be reasonably well housed” and there would, for example, be no government subsidising of “luxury living for millionaires” because there would be no millionaires.
Attlee was Prime Minister from 1945 to 1951, and Wilson from 1964 to 1970. Attlee’s pledge should be read in comparison with what the present authors have to say about housing and the inequality of wealth.
Edgar Hardcastle