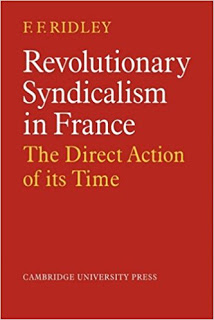 Revolutionary Syndicalism in France, by F. F. Ridley. Cambridge University Press. £4.20.
This is a study of the theory and practice of the French equivalent of the TUC, the Confédération Génerale du Travail, in its syndicalist period from 1900 to 1914.
The basic unit of worker organisation in France at this time was the syndicat, or local union of workers in the same trade. Hence “syndicalism”, which on its own is really just the French word for trade unionism. The CGT leaders described their policy as “revolutionary” syndicalism. They were anarchists and wanted the unions to stage a general strike to overthrow capitalism and set up a moneyless, wageless, Stateless society where the unions would control production.
The bulk OF the CGT members, however, were just militant trade unionists, interested mainly in fighting the day-to-day struggle to improve wages and conditions within capitalism. Most of the CGT’S policies for this struggle—political neutrality so as not to divide workers who need unity to defend their economic interests; recognition of the class struggle between the workers and the capitalists and their government; strike action; the only real gains are those the workers get by their own action—were just good trade unionism. Others such as sabotage and intimidation were, as we shall see, a sign of the movement’s weakness.
The anarcho-syndicalist leaders of the CGT were in the same sort of position on the industrial front as the Social Democrats were on the political front: workers supported them not because they wanted to overthrow capitalism, but because they felt that their policies would bring some improvements within capitalism. Like Socialism for the Social Democratic parties, the General Strike became for the CGT a more and more ultimate aim which had little reference to its day-to-day activity, except perhaps as an inspiration. Ridley brings out this point well.
The CGT was no more an anarchist organisation than the Social Democratic parties were socialist. Its pretensions too were exposed at the outbreak of the first World War, though it seems to have been a reasonably good trade union body for its time.
Ridley brings out a number of other valid points. Wage and salary earners were a minority both of the population and of the electorate in the France of this period. Of the 12 million wage and salary earners, only about 836,000, or less than 7 per cent, were organised and less than half of these were in the CGT. The CGT, in other words, only represented about 2 to 3 per cent of the working class. As Ridley says,

in a sense, violence is the only path open to the weak. There is a close relationship between weak, unorganised labour movements and the outbreak of revolutionary or anarchist activity in Russia, Spain and Italy, as well as in France.

French industry too was backward. The syndicalist slogan “The Workshops to the Workers” was taken literally to mean that the small-scale workshops where many French workers were employed would be run by the syndicats, or local unions. It is significant that the nation-wide unions representing workers employed in large-scale industry—mines, textiles, railways, post office—though in the CGT were opponents of its anarchist leaders.
The General Strike was originally put forward as an alternative to the ballot box as a peaceful way to end capitalism. But, as the Socialist Party of Great Britain pointed out at the time, experience of much lesser strikes showed that any such move would be met by the violence of the State. And. why if a majority can be persuaded to strike for Socialism don’t they at least try the easier way—the ballot box—first?
The cult of action, or action-for-action’s sake, some syndicalist theoreticians espoused was shared also by extreme nationalists and monarchists which, as Ridley suggests, is why after the first World War so many of them found it easy to go over to fascism. Mussolini himself, though never an anarcho-syndicalist as such, was a leading figure on the direct-actionist wing of the Italian Socialist Party before the war. Ridley also says that it is wrong to see Sorel’s Reflections on Violence as a statement of syndicalist principles since Sorel was not a syndicalist leader or militant; he was only someone who happened to sympathise with some aspects of syndicalism at the time he wrote his book.
Unthinking activism and contempt for democratic discussion and peaceful persuasion—break-up of meetings, lectures and sports matches, confrontations with the police, physical attacks and threats against people with different views—is again being indulged in by the assorted followers of Mao, Guevara and Trotsky without their realising its dangers. This is vehemently opposed by the Socialist Party.
Professor Ridley’s book is a good analysis of syndicalism, though some may find the philosophical discussion in the third part a little abstruse.
Adam Buick