Book Review: How Green Was My Peregrine

The Socialist Myth by Peregrine Worsthorne. (Cassell.)
This is a comical book which might still do some members of the Labour Party 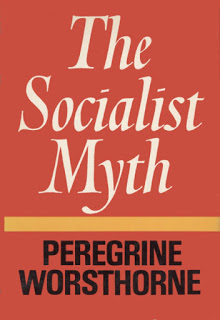 a bit of good by exposing some of their prejudices. Worsthorne has discovered that

If Labour’s last six years made anything clear, it was surely that a Labour Government . . .  is forced to do many things which actually increase rather than decrease working class suspicion.

But, says Worsthorne, this is what the success of “British democratic socialism” depends on. This sort of drivel is a fair sample of the book; for Worsthorne democratic socialism is the Labour Party. But as he does not know what Socialism is, or what the state is, or democracy, it is natural for him to think of nationalisation as socialism. From that it is easy to point out that

With his main conclusion that Labour government does not and cannot work we agree; in fact we have been saying it for over sixty years. So far we have not come over enough; bad luck for Worsthorne that, although he thinks Labour’s function is to be the opposition, the workers are returning to supporting them at elections, at least until they are disillusioned about Labour again.
The reason for this is clear. The vast majority of electors do not read clever books like Worsthorne’s. They tend to judge entirely on their limited personal experiences and at present their experience of the Heath government is such as to persuade them to try Wilson again. They vote for lesser evils and against what they dislike most — until they become socialists.
Horatio.