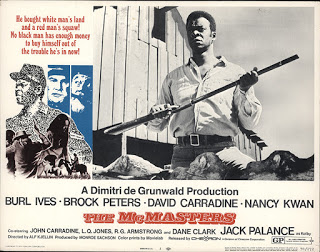 The McMasters (Directed by Alf Kjellin.)
Benjie, a negro, returns after four years civil-warring on the side of the North to the ranch of his adopted father, McMaster in the deep south.
McMaster (Burl Ives) is the only one to offer a welcome, since Benjie’s blue uniform is resented in the Bible-thumping, Reconstruction — pulverised, poverty stricken, secessionist, racist cattle community.
Benjie gets half the ranch from McMaster, who realises he is past managing it alone. The ranch hands leave in disgust. Benjie saves some half-starved Indians from a lynching for cattle-rustling, and offers them work which they accept. Benjie’s generosity to his employees is partly fired by his realisation that he himself is, to the hostile community, scum like the Indians: “Everyone knows them niggers aint people— they aint got souls”, is how the town storekeeper justifies riding with the local Ku Klux Klan, and brainwashes his young son, who already longs to watch his first lynching.
Benjie gets an Indian squaw as “a gift”(!) from the tribe of grateful wage-slaves. Finally Benjie’s incongruous landowner status, his bloody defence of his cattle from salt-poisoning Klansmen, his marriage in the white man’s church to his squaw, his new found self-respect and refusal to be intimidated into selling-out drive the local Klan, led by Gilby, (Jack Palance) the confederate war-hero embittered by the loss of his arm, to attempt to lynch him. The first attempt ‘only’ gets Benjie’s wife, Robin, raped and two Klansmen killed before they are driven off the ranch.
The cattle season over, Benjie realises that with the Indians who have returned to their village, he and McMaster will be unable to protect the ranch or his wife in the event of further brawls. He sends Robin back to her tribe for safety, and tries to enlist the aid of the Indians but the tribal elders make it clear that Benjie is in their eyes the same as the whites, who, as property owners will spill blood for it, and they want no part in a property war . . . “The land belongs to no-one—you like us Benjie, you homeless”.
The inevitable showdown with the Klan follows—a burning cross is the signal for a bloodthirsty finale in which McMaster is shot dead, the ranch buildings are razed and Benjie himself is only saved from a coldblooded burning by the inexplicable intervention of the younger Indian braves—his former employees—led by the articulate primitive communist ideologist, brother of Benjie’s wife. Gilby is killed, the Klan are temporarily routed, but after Benjie recovers from his wounds at the Indian village, to the complete bewilderment of Robin’s brother he once again staggers back to rebuild his smallholding, to face the Klan and probable death with Robin.
Robin’s brother’s cries ring out as the film closes: “You’re crazy Benjie, you got no home, you like us, you got no home”. . . but Benjie, pathetically mesmerised by his title deeds, already has his values fixed—property before his own, his friends, his wife, his Indian brothers’ lives.
All in all, a film expressing all the contradictions of the class and caste-ridden society of post civil war America. The Indian elders alone attract sympathy, with their humanism and refusal to sacrifice themselves for property. But they, one senses, are doomed to an ever-more precarious nomadic existence and probable extinction from starvation (despite their rustling activities) or from epidemic.
The film will appeal to all those who flock to watch ketchup being spilled in great quantities, who are titillated and thrilled by the depiction of inexorable violence. The stark scenes in it are overtly commercial. No relief from the all-pervading atmosphere of brutalising and dehumanising 1865 Bible Belt Society is offered, indeed the producer seems to want us to project the despair into the present day. Certainly no relief is realistically possible in the historical context of absolute scarcity and the dominance of property, status and compensatory racialist ideas do not lend themselves to any. But a hundred years later scarcity is a myth; competition and the hostility, mutual suspicion, atomization and savagery it engenders are archaic and unnecessary; the Benjies of the world need no longer cling to tangibles at such a cost; the day of the Indian is near again, at a much higher and more secure level of technology and culture.
C. H.