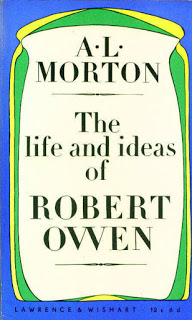 The Life and Ideas of Robert Owen, by A. L. Morton, Lawrence and Wishart. 12s.6d.

Report to the County of Lanark. A New View of Society by Robert Owen introduced by V.A.C. Gattrell. Pelican. 7s.

The co-operative movement in Britain looks to Robert Owen as its founding father. Readers of Marx and Engels have met him as a “utopian socialist”. Gattrell thinks he was more of a Tory philanthropist.

In any event Owen was a remarkable man. Born in Newtown in Wales in 1771 he became a successful millowner first in Manchester and then in New Lanark. At New Lanark he pursued what today would be called an “enlightened labour management policy”, providing welfare services and better working and living conditions for his workers. As a result productivity and profits increased. But what struck Owen as the lesson of New Lanark was that “man is the creature of circumstances” and that “human nature . . .  is without exception universally plastic”. People’s characters could, in other words, be moulded for them. From this premise followed quite logically his attack on all existing religions and on individualism as well as his views on crime and punishment, education, sex, marriage and divorce. It led him, whatever Gattrell says, towards socialist conclusions.

It is quite true that Owen was opposed to working class industrial and political struggle and appealed rather to the powers-that-be. But this was quite consistent with his crude materialism for he was asking the kings, governments, churches and Tory philanthropists to become those who would remould the environment. His model communist communities were also, from his point of view, a way of educating the educators, training grounds for those who would change other people’s environment for the better.

The absurdity of Gattrell’s suggestion can be seen merely by reading the works he introduces. From them Owen appears as a rationalist and supporter of science and industry who was concerned about the effects of capitalist individualism on human behaviour and happiness. Morton’s selections include passages from Owen on religion and the family (as well as on spiritualism and phrenology which he fell for in his old age) which can leave no one in any doubt that Owen was no Tory sympathiser.