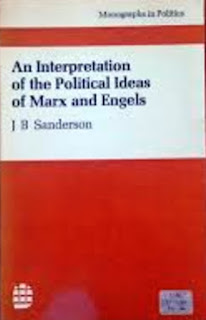 An Interpretation of the Political Ideas of Marx and Engels. by J. B. Sanderson. Longmans. 18s.

It would have been surprising if the current academic interest in Marxism as a theory did not produce some more or less accurate accounts of the views of Marx and Engels. Sanderson set himself the task of giving an objective account of these views and we must say that in this book he succeeds very well.

Sanderson brings out a number of the important principles that underlay Marx and Engels’ policies (the quotes are his):

1. The scheme of social evolution (primitive communism, chattel slavery, feudalism, capitalism. Communism) was meant as a description of what had happened in Western Europe and was not necessarily universally applicable.

2. The socialist revolution depended on a certain level of social and economic development and could not take place anytime and anywhere merely because a determined minority wanted it.

3. Those who represented a ruling class politically did not have to be of that class, but merely had to share its views and protect its material interests.

4. Under capitalism the working class were already the economically important class since the capitalists had become economically redundant “leaving the work of supervision to an increasingly numerous category of managers.” All that was needed to dislodge them from their privileged position was a political revolution.

5. To win political power the working class as a whole had to be “conscious of their common class position, class interests, and class enemies, and willing to act upon that consciousness” and to have organised themselves into a “gigantic political party.”

6. After winning political power the working class would for a “limited” or “short” period become the ruling class as a step towards the abolition of all classes. This political transition period would be the dictatorship of the proletariat as a whole, and not of a minority of revolutionary leaders.

7. In socialist society production of commodities, i.e. articles for sale, would come to an end. Instead “production would no longer be directed by the interests of a privileged minority but would be guided by an overall rational plan which had reference solely to human needs.”

8. In socialist society the coercive State machine would be replaced by “a nonpolitical type of authority” and there would be “effective communal decision without coercion.”
Indeed Sanderson’s book is unusual in that it gives an accurate picture of what Marx and Engels saw as the main features of future society. Nobody can read and understand this book and still think that the likes of Lenin, Trotsky, Stalin or Mao adhered to the same political principles as Marx and Engels.
Sanderson also deals with some of the specific policies advocated by Marx and Engels on the basis of their principles. Some of these the Socialist Party of Great Britain has regarded as mistakes while others we no longer regard as relevant in the changed conditions of the second half of the twentieth century.

9. The socialist revolution would take place “just possibly at the polling booths, but much more likely at the barricades.” We would now put the emphasis emphatically the other way round.

10. In economically backward countries still dominated by feudal rule Socialists should help the bourgeoisie to carry through their revolution. We say this is now no longer necessary since capitalism is firmly established as the dominant world system so that Socialists everywhere should be working for the immediate establishment of Socialism on a world scale.

11. Marx and Engels regarded Tsarist Russia “as the most serious obstacle to revolutionary progress” and advocated and supported war against it. We say they were wrong to support wars.

12. In the early stages of Socialism there could not be full free distribution according to needs and. although money would be abolished, distribution would take place by means of non-circulating labour-time vouchers. We say that, even if there was a temporary shortage, such vouchers would not be the fairest method of rationing but that in any event the tremendous technical developments in the last hundred years have meant that free distribution can be implemented almost immediately.

We would not endorse everything Sanderson says, but nevertheless this is a book all Socialists and people interested in political theory should read.