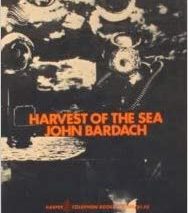 Harvest of the Sea, by John Bardach. Allen & Unwin. 55s.
The sea, covering seventy per cent of the earth’s surface, was until recent times the last and largest unexplored region of the earth. However, the advance of scientific knowledge has brought into being new instruments and methods for learning about and exploring the oceans and has pushed back the boundaries so far that man is now within sight of opening up yet another field to satisfy his desires and needs.
This very good non-specialist book is an admirable introduction to the multi-scientific discipline of oceanology, which is that branch of learning which deals with the study of the seas, embracing a range of information from the physical characteristics of the ocean floor and its waters and marine life to speculation on the sea as a site for cities both on the surface and underneath. But it is the sea as a source of food and natural resources which is of the greatest importance to the human race.
The former subject is dealt with at considerable length. An essential requirement for maintaining the well being of the human body is protein of which fish is a very rich source. In fact for certain peoples like the Japanese virtually their main source of protein is fish. Of the twenty five thousand main species of fish now known to man only about two hundred are captured for food. Molluscs and crustaceans are used even less.
Fish also enter into peoples’ diets in an indirect manner, inasmuch as certain small varieties of fish are rendered down into fish meal which is used in pig and poultry food.
Bardach points out that this not only lengthens the food chain but is also wasteful. A further point he makes is that the resources of the sea are not limitless, the greatest threat to them being pollution and overfishing.
The blue whale has already been hunted to the point of extinction, and other species of whale are in danger. The menace he indicts without actually mentioning it by name is capitalism. Norway. Russia, and Japan, the three principal whaling nations, have large amounts of capital invested in whaling vessels and factories and they are compelled to catch as many whales as possible to maintain profitability. This example alone demonstrates the futility of expecting capitalism to operate against its own economic laws, even its long term interest.
With regard to aquatic plantlife there is nothing at present acceptable as a foodstuff with the exception of a few seaweeds such as laver bread. Algae also enter into peoples’ diets via certain products such as ice cream and beer.
If fossil fuels continue to be used up at the present rate, then alternative supplies will have to be found and the seas may come to the rescue in the following ways: Harnessing the tides (an installation has already been set up near to the mouth of the river Rance in France). This method of producing electricity is dependent upon the suitability of the coast line. Temperature differences between surface and deep tropical waters, atomic fusion by heavy water. Methane from fermented organic matter (already available from urban sewage systems but not utilised at present because of capitalism’s economic restrictions).
Bardach sees the oceans as a form of communal property and until recently this view could have been regarded as justifiable. with reservations; for the sea itself was not subject to international disputes and the territorial sovereignty of individual countries bounded by the sea was at one time recognised by common consent to extend no more than three miles from the shore line (although some countries have unilaterally extended their sovereignty beyond this). Fishing vessels of different countries share the same fishing grounds and pirate radio ships were recently broadcasting to Britain well outside this three mile limit without the government being able to take any other action than blocking transmission.
However, the discovery of oil and natural gas beneath the sea bed beyond the three mile limit has given rise to a new issue for international capitalism to quarrel about: how to divide up the oceans of the world for mutual exploitation. No doubt the experts on international and maritime law will have their work cut out for them as they try to devise some arrangement for achieving this to every interested party’s satisfaction. One thing beyond dispute is that the working class of the world will not gain anything from any agreements made. In fact they will be subject to more intense exploitation, risks and pressures in the mad scramble to get at the wealth beneath the sea.
Only when we get a sane system of society where the welfare of all is the guiding principle and we are no longer subservient to the blind economic forces of capitalism can the wealth of the oceans be used solely for the benefit of mankind.
Unfortunately John Bardach throughout his book sees no further than capitalism and indulges in pious hopes that the oceans are not going to be abused too much in pursuit of profit, which is wishful thinking indeed.
L. B.