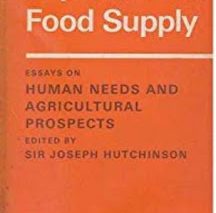 Population and Food Supply, ed. by Sir Joseph Hutchinson. (Cambridge University Press. 30s.)
Famine in Retreat? by G. Bridger and M. de Sissons. (Dent. 45s.)
Producing enough food to feed the world’s growing population is not a problem in itself:

We have the technology to get the rest of the world into the position of food surplus that the West has enjoyed in recent years (Hutchinson).

Producing more food is not the greatest problem, from the scientific point of view . . .  A world that is capable of sending men to the moon can surely grow enough food to feed itself. We believe it is capable of producing that food (Bridger and de Sissons).

The problem of course is poverty. The hungry people of the world — there are perhaps some 350 million on the verge of starvation — simply do not have the money to buy the food they need and so do not constitute a profitable market. Food production is limited to what can be sold profitably, and its rate of expansion is governed by the rate of expansion of the market for food. Both books accept this system and discuss “the problem of financing output” or “trade as a means of moving surpluses to areas of shortage”. Bridger and de Sissons even argue that the rate at which food production grows should be limited to 3 or 4 per cent a year since a higher rate, without productivity increases. could lead to “unsaleable surpluses”. If you accept capitalism this may seem reasonable but once you realise that Socialism is possible it only exposes the fetter that production for sale is. Hutchinson reminds us of another of capitalism’s absurdities :

a balance between supply and demand means no more than that there is as much food on the market as can be purchased with the money available. It docs not mean that there is enough food to meet all human needs.

The only framework for a rational solution of this problem is production to meet human needs on the basis of the common ownership of the world’s resources. This means an end to finance and trade, and the problems they bring, and the institution of the planned distribution of food to where it is needed. 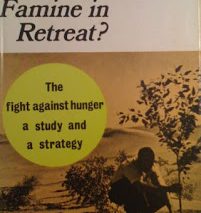 Oddly enough. Bridger and de Sissons do come near to discussing the socialist alternative when they say:

If all we had to do to maintain the world’s population in food was to measure now much we needed, apply scientific discoveries and then grow the food required, we would have few food problems.

In a socialist world this essentially is all we would have to do. Certainly some of the problems — the technical (including the training of farmers in modern methods) not the financial ones — that they go on to discuss would be inherited, but they too could be solved within a society geared to serving human needs instead of profits.
Hutchinson’s collection of lectures given in Cambridge in 1966 and 1967 is a little pessimistic, one contributor even comes near to arguing that only birth control is the solution. Famine in Retreat?, especially the first part, is the better book. It is easier to read and discusses the problems, even those exclusive to capitalism, in a simple and sensible way.
Adam Buick