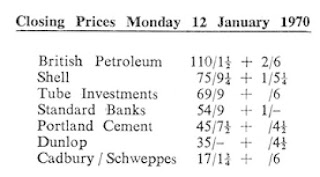 Amid the welter of publicity given to the amount and extent of the aid offered by various states to Nigeria, the information contained in the share prices quoted above has been overlooked by many people in the emotion-charged atmosphere generated by the mass media. All the aforementioned companies have large interests in and/or around the territory claimed by secessionist Biafra. It is worthwhile here to point out that if the economic advantages (mainly Oil) had not been situated where they were, there would have been no secession, leastways, not by the Igbo tribe.

As soon as markets opened after the formal surrender was announced, there was steady buying of these shares. This would seem to imply that concern for the situation in Nigeria is not solely based on humanitarian considerations. Which indeed it isn’t.

Before the outbreak of war, Nigeria was rapidly joining the top ten oil-producing countries. Up until the attempted secession, the total oil output of the country was 582,000 barrels per day (bpd) which brought in an annual income of £100,000,000. Last year, even with the war raging around them, the oil companies managed to extract 550,000 bpd, and experts calculated that this figure would have been half as much again (775,000) if production had not been disrupted by the fighting.

The oil in Nigeria has two great advantages over other oil supplies, which make it such a highly desirable commodity. Production is so situated as to be able to supply the whole of Western Europe and America, without the necessity of rounding the Cape of Good Hope the economic significance of which needs no explanation. The other great advantage lies in the chemical constitution of the oil. It is relatively free of sulphur, and is in great demand for its pollution-free qualities.

Now that the fighting had ceased, it is expected by oil production experts that within a short time, Nigeria will be producing 1,000,000 bpd, which will raise the country to the status of eighth position in the league of oil production. To facilitate the attainment of this status. Shell/ BP were granted safe access to their oilfields (by the federal authorities) in the spring of 1969 to implement a programme of repair and expansion, the cost of which was £52,000,000. Shell BP are expecting to boost their own production to 500,000 bpd shortly. This target will be achieved with the aid of an offshore tanker terminal. with the capacity to receive oil pumped direct from the oilfields at a rate of 350,000 bpd.

SAFRAP, the French state-firm, was producing 41,000 bpd prior to the outbreak of war, but it is extremely doubtful if they will be allowed to resume production after supporting the losing side.