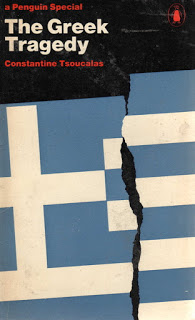 The Greek Tragedy, by Constantine Tsoucalas. Penguin. 6s.
THE Socialist Party of Great Britain has always argued that in places like Britain where there is a more or less democratic State — that is, where the state machine, including the armed forces, is under the control of a popularly-elected government — a Socialist majority can win power peacefully in an election.
Others (few of whom really share our view that there must be a Socialist majority before there can be Socialism) argue that the capitalists will never allow their rule to be overthrown by peaceful means.
The Greek Colonels’ coup in April 1967 seems, on the face of it, to give some validity to this argument. For here, a few days before the start of an election campaign which a radical democratic party was expected to win, the armed forces supported by the King and prominent businessmen imposed a military dictatorship.
However, a closer study of the facts shows that this coup does not disprove our proposition. Constantine Tsoucalas’ book clearly shows that Greece did not have a democratic State before 1967: there was a parliament though elections to it were often rigged, but even this had no control over the armed forces.
This was a legacy of British occupation after the war. By agreement with state-capitalist Russia. Greece (which had strategic importance for control over trade routes through the Eastern Mediterranean and over the oil fields of the Middle East) was assigned to British capitalism’s sphere of influence. The British government had been faced with a problem since the bulk of the armed men in the Greek resistance, who were set to take over when the German army left, were under “communist” leadership. Tsoucalas describes how the British government built up a rival military force out of the Royalists in the old Greek Army and even out of former collaborators. Their political puppets, on the other hand, were chosen from the pre-war liberals and republicans. Writes Tsocalas:

The double structure of power, democratic in the political facade but Royalist-fascist in the forces of coercion, which was gradually built up from 1943, was to be a crucial factor in the future. For the construction of the new Army as an autonomous entity, not subject of governmental authority, did not end with the termination of the civil war. Despite the fact that the right wing was in power between 1952 and 1963, the army remained ‘untouchable’. Under the nominal authority of the King, the special status of the armed forces which was planned by the British in 1944-6 became the dominating characteristic in the Greek political game.

The government’s rigging of the 1961 election was so blatant that it provoked a popular reaction which further strengthened the opposition Centre Union. This party, which had adopted a vague programme of democratic reform, won the 1963 elections and its leader, the ageing George Papandreou (a former British puppet), became prime minister. His government curtailed the activities of the secret police and put through some minor reforms of the State structure, but

despite changes in the senior personnel of the police, despite the atmosphere of freedom, despite the liberalisation of the trade unions, the most important weapon of the Right—the Army, stronghold and last resort of the system of vested interests—was not touched at all.

In 1965 Papandreou was ousted as prime minister in a sordid manoeuvre in which some of his parliamentary supporters were persuaded to abandon him by offers of Ministerial posts and perhaps also of money. The Centre Union, again in opposition despite popular support, moved towards a more radical position. The radicals’ leader, Papandreou’s son Andreas, made it clear that if elected his party would this time carry out a thoroughgoing democratic reform of the State: putting the King in his constitutional place; purging the Army and subjecting it to government control; ending the vested interests in government contracts of certain Greek tycoons by a policy of State enterprise. Faced with this prospect, which they could no longer ward off by rigging elections or corrupting politicians, the Army, the King and the tycoons resorted to a military coup and dictatorship.
The Colonels’ coup was thus not the overthrow of an already established democratic State, but a bid to prevent the establishment of such a modern capitalist political structure. A coup in an essentially undemocratic State faced with the election victory of a democratic reform party has no relevance to our proposition that a socialist majority can win control of an already established democratic State through elections.
Adam Buick