Aspect: A Question of Class

Ask any reasonably literate but otherwise typical Lefty for his appraisal of the class structure of capitalist society and he will probably inform you that there are two classes in society — the working class and the capitalist class. There is even a reasonably good chance that he will be able to recite Marx’s definition of these from the Communist Manifesto :

But give him a couple of minutes more and he will no doubt be at least neck deep in the regular assortment of complex arguments about the relative roles of the working class and the middle class/petty bourgeoisie/salariat which collectively represent his grand design for the socialist revolution.

In other words, nearly all left-wing groups exhibit a very definite schizophrenia on the question of social classes. At an abstract, intellectual level they will adhere to the Marxian position, but for all practical purposes (that is for deciding their overall strategy and their day to day tactics) they rely on an entirely different analysis of society. As an illustration of this we could refer to the ways in which such organisations reacted to the upheaval in France in May 1968. They all argued that this episode had an enormous significance not just because millions of ‘workers’ showed their dissatisfaction and contempt for Gaullisme through strikes and demonstrations but also because “many sections of French society followed the lead of the workers — footballers, office workers, customs men, hotel workers . . .” [2]

Ideas such as these are as dangerous as they are confused. Not only do they lead to a completely false assessment of what constitutes the socialist revolution but they also serve to reinforce the divisive pressure which capitalism is bound to exert on its workers, They encourage the already widespread belief that wage earners in different sectors belong to different social classes and therefore do not have identical interests — a myth which as much as any other helps to keep capitalism secure. By way of contrast, the Marxist approach of the Socialist Party of Great Britain offers a means of uniting workers around an understanding that all “wage-labourers who, having no means of production of their own, are reduced to selling their labour-power in order to live” are members of the working class and therefore have a common interest in getting rid of capitalism.

Perhaps we can clarify this by taking a group of workers regarded by most people as impeccably ‘middle class’ and showing how they arc exploited. The dental profesion is particularly interesting in this respect because not only are they a relatively small body of workers on whom a considerable amount of data has recently been published but also because they are in the uncommon position of having been ground down into working directly for wages within the last generation. Up till roughly twenty years ago dentists in Britain really were self-employed people. But the transfer of most dental surgeons to the National Health Service in the immediate post-war years meant that they were now nearly all employed by the state. (Out of 15.000 dentists in Britain in 1967 only 500 were estimated to still be working in private practices).

Like many other workers, dental surgeons in the general dental services are paid on a piece rate system. There is a complex mechanism for fixing these rates but basically it amount to the government periodically laying down a target annual net income for the average dentist, providing he works a specified number of hours per year. The Dental Rates Study Group then draws up a set of fees designed to produce average earnings at the target level. This method of payment has been described by many dentists as the ‘treadmill system’ “for, as more treatment is carried out each year by dentists working faster or more efficiently than previously with the help of technological changes, the scale for that treatment will fall, or at least not be increased to the extent that it might.” [3] To give an example of how this works in practice we could mention that the fee being paid for a single surface amalgam filling in the mid-sixties (13s.6d) was less than it had been ten years previously (15s.). How this affects the individual dentist was well summed up in the report just quoted:

The system is such that income is in fact related to the total number of courses [of treatment] an individual practitioner undertakes since the more the profession accomplishes, the lower the income per course. Thus if an individual dentist maintains only a constant performance his income falls. [4]

The pressures acting on this group of workers over the last twenty years have given rise to enormous increases in productivity— and an equally enormous upsurge in the rate of exploitation. The total number of courses of treatment carried out in the general dental services by roughly the same number of dentists throughout has more than doubled since 1949, while the cost to the government of providing this treatment has fallen from more than £5m. to around the £2m. mark (at constant 1949 price levels).

The ways in which dentists react to this situation are no different from those of other workers. Two recent surveys on the attitudes of dentists towards their wages and working conditions [5] showed that 55 per cent objected to the long hours they were forced to work to maintain their incomes, a similar percentage found the pace of the work gruelling, and 78 per cent disliked the restrictions placed on their work by their method of employment. Despite these sort of data, however, many left-wingers would object that although it might be possible by these means to demonstrate that objectively groups like dental surgeons are members of the working class, subjectively they remain intransigently capitalist minded. Such sections, they would say, can be “integrated into the system, to monopoly capital” by the relatively high wages and other benefits which (according to the Leninist theory of imperialism) capitalism can use to buy off parts of the working class in the most advanced countries. And as evidence of the overriding capitalist ideology of professional workers like dentists they would point to the fact that they do not consider themselves working class. Perhaps more than anyone else they differentiate between their own status and that of manual workers and other lower paid strata.

But objections such as these can be shown to be sociologically quite naive. The conviction that higher paid workers can be bribed into accepting capitalism by the level of their salaries rests on the assumption that in their attitude towards society they will be predominantly motivated by money or material rewards. If this were the case, it would be clearly shown in their work motivation. Such a theory has a very long pedigree, but at the same time has very little else to recommend it. As Tom Lupton, the professor of industrial sociology at the Manchester Business School, has put it:

It is easy to fall into the error of supposing that because the desire for money is by common consent a compelling motive for working that it is also the overriding motive. Work is a social activity, that is it involves the worker in relationships with others. If the worker is faced with a decision whether to attempt to maximise income or to sacrifice possible gains for the sake of establishing or maintaining satisfying relationships with his workmates, he might well choose the latter course. [6]

Researchers like Lupton arrived at these conclusions mainly by studying the working behaviour of piece rate workers in factories. Research into the motivating factors for dentists has given results almost identical to those for other piece rate workers. Thus a recent survey carrying the question ‘What are the things you like most about your work?’ elicited the following responses: 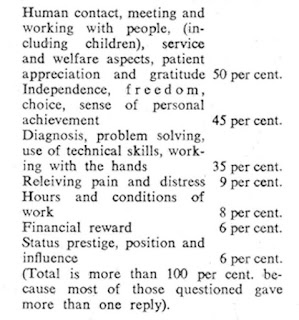 These sort of figures, then, do not give a very impressive backing to the contention that higher paid workers like dentists are primarily concerned with the defence of their supposedly privileged position and must therefore be considered as being distinct from the bulk of the working class. But, for all that, it does remain true that white collar workers (and among them the example we have been using of the dental profession) generally do regard themselves as different from industrial workers. But, of course, this is not a one way process. Blue collar workers reciprocate with similar prejudices about non-industrial workers, regarding them as ‘middle class’ and so on. It is quite illogical to use the common left-wing argument that subjectively white collar workers are outside the working class because they do not identify themselves with their fellow workers. Exactly the same stricture can be applied to blue collar workers.

An unbreakable sense of working class solidarity can only spread at the same rate as socialist understanding develops among all sections oft he workers. The Socialist Party constantly attempts to foster this unity in its work of analysing capitalism and its class structure and presenting the socialist alternative to present society. On the other hand, the divisive activity of the Left is entirely symptomatic of their slovenly attitude to Marxist theory. Almost to a man they are committed to ‘leading the working class’. A hard task indeed when they don’t even know what the working class is!