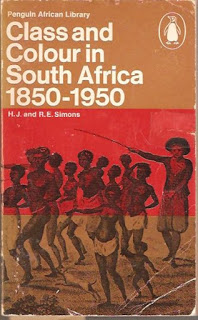 Class and Colour in South Africa, by H. J. and R. Simons, Pelican. 21s.
Most of this book is a history of, or rather an apology for, the Communist Party of South Africa, which is not surprising since its authors were both prominent members of that Party at the time of its dissolution in 1950.
The CPSA, like so-called communist parties everywhere, had a shameful record of twists and turns in accord with the changing policies of state capitalist Russia. At one time it backed the white racist Labour Party and its alliance with the Afrikaner Nationalists; at another it was demanding a Black Republic. Then it violently denounced all other labour and nationalist groups; later it sought a “people’s front” with them.
The CPSA became committed to demanding a Black Republic after its 7th Congress in January 1929. The Simons — and this is typical of their apologies — claim this decision was reached democratically and not forced on the Party by the Communist International. Again, when in 1931 a number of the Party’s leaders and prominent trade unionists were expelled, according to the Simons this was another free decision.
A number of embarrassing episodes are glossed over. The Simons merely record without comment the execution of Lazar Bach, then a leading member of the CPSA, when he went to Moscow on its behalf in 1935. Then there is their Party’s attitude to the Second World War. “Unlike communists in English-speaking countries, and without any prompting or instructions from outside”, we are told, “the party’s central committee went into opposition immediately on the outbreak of war”. They called for an immediate peace and pointed out to the Africans, Coloureds and Indians the hypocrisy of the government’s claim to be fighting for democracy while denying them the most elementary democratic rights. After the invasion of Russia in June 1941, of course, the CPSA was all out for the war. Now they opposed strikes and urged African and other workers to settle their grievances “while avoiding any stoppage of work”.
There is also much more than meets the eye behind the Simons’ special criticism of the Non-European Unity Movement (NEUM) and its policy of non-collaboration (e.g., boycott of elections to Native and Coloured councils) with the government. The Simons suggest that this was a policy of inaction that particularly appealed to the Coloured teachers who led the NEUM since it gave them an excuse not to engage in activities like contesting elections that might endanger their jobs. Maybe, but the CPSA has good reason to try to discredit the NEUM since, as a trotskyist-influenced and more radical body, this is their main rival for the support of African, Coloured and Indian political activists.
It is facts like these which suggest that other parts of the book are probably unreliable too.
Adam Buick