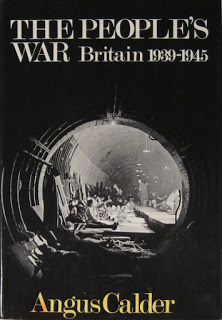 The People’s War by Angus Calder, Jonathan Cape, 65s.
It is some time now, since the re-assessment of the 1939/45 war got under way. Many Allied “successes” have been shown up as failures. sometimes as grisly reminders of the cold-blooded slaughters of 1914/1918; the reputation of the war leaders, at the time unassailable, has been badly damaged. Even Churchill has been demoted to a human being—and a not very effective one at that.
Angus Calder was born during the war, so he has to rely on something more than memory for his account of it. But those who can remember will find themselves reliving their experiences when they read his book. They might also have feelings about realising that events they can recall so well—evacuation, air raids, rationing, war propaganda—are not fit subjects for the historian.
This book is aptly titled; 1939/45 was a people’s war because the entire population was in it, indeed, almost under fire, from the start. When it came, it did not prove as terrifying as the government had promised and the total devastation which in the Thirties had been almost universally forecast was simply not a possibility. Even in the German cities like Hamburg and Dresden, which took terrible batterings from air, recovery was quickly organised. Indeed, one of the big miscalculations of the Allied death accountants was their over-estimation of the effects of air attacks on the German population.
Angus Calder does a good exposure job on the many things which while the war was on the official propaganda machine could not admit. The machine had to cover up the facts on evacuation, the devastating effects of kids from the big city slums being dumped onto country villages and, in some cases, stately homes whose owners were shocked to find the extent of the duty which England that day expected them to do. Oliver Lyttelton, who became a leading member of Churchill’s government, was stuck with 31 evacuees and wrote about them: “I had little dreamt that English children could be so completely ignorant of the simplest rules of hygiene, and that they would regard the floors and carpets as suitable places upon which to relieve themselves.”
Then of course there were the plain lies—of British losses always being a fraction of the German, of fantastic victories against huge odds being won by innate superiority. perhaps the most famous of these lies was the claim that the RAF had destroyed 185 German aircraft on August 15, 1940 but which was in fact only 75 for the loss of 34 British fighters.
Another great hush-up was the scandal of the Tubes, when Londoners, in panic at the increasing severity of the Blitz and at the inadequacy of their shelters, took over the Underground stations. At first this was against official opposition but the movement proved irresistible and as the government gave way and the people poured each night onto the stations conditions in them became terrible, with nothing—bedding, sanitation—organised to receive them. Perhaps we can smile now at the way the propaganda machine persuaded people to forget this sort of hardship—how they got them running savings weeks, giving up their aluminium pots to be turned into aircraft, eating carrots to help them see better in the blackout.
Angus Calder has one very interesting section on the small band who refused to fight, contrasting the treatment received by the conscientious objectors in the 1914/18 war to that of 1939/45. In the Second War the government—and Churchill himself—went out of their way to denounce victimisation and even allowed prominent pacifists to lecture the troops. Which was, of course, an exceedingly wise policy because, apart from anything else, it drew much of the war opponents’ sting and prevented the objectors being raised into martyrdom.
Yes, it was a people’s war and the people themselves believed it to be. So towards the end we were fed with super promises about what the people were going to get out of victory and Beveridge became a popular hero. It was left to the Attlee government to show up the reality, that the people get the capitalism they deserve or deserve the capitalism they get. Angus Calder’s book is a smoothly written, comprehensive history of those days.
Ivan