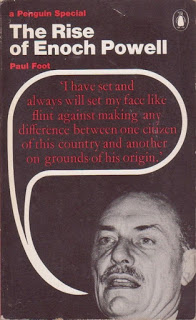 The Rise of Enoch Powell, by Paul Foot. Penguin 4s.
Enoch Powell is a hypocrite and an opportunist as Paul Foot shows in this short book.
Powell entered politics after the war as a Tory Imperialist who opposed giving India independence and even suggested how it might be reconquered. But the mid-fifties, however, he had abandoned these illusions and was a Conservative Cabinet Minister. During this period the late Sir Cyril Osborne began his ranting and raving about coloured immigration leading to a “coffee-coloured” Britain. Powell, on the other hand, said nothing controversial on this issue. Foot can find no speech of his against coloured immigration or integration till 1964. In fact Powell was Minister of Health for three years and, as Foot points out:

During Powell’s régime at the Ministry of Health, Health Service recruitment drives for doctors and nurses in the West Indies and from India and Pakistan were not slowed down in anyway.

What led Powell to change his mind and make a series of sensational racialist speeches in 1968 and 1969? Foot suggests that it was sheer opportunism. The Tory victory at Smethwick in the 1964 election had shown that colour prejudice was a vote-winner. Powell, says Foot, resolved to exploit this in a bid to become leader of the Tory party.
At one time Powell could have been regarded with some respect because of the frank way he spoke out against futile attempts to reform capitalism. Capitalism, his message went, runs on profits and Governments should recognise this. Socialists, of course, agree that capitalism runs on profits and have always said that any Government, be it Labour or Tory, would be forced to recognise this in its policies.
This is where Powell is shown up as a hypocrite. Foot quotes some of Powell’s many speeches in favour of the “free movement of labour”. In the Sunday Telegraph of 3rd May, 1964 he asked:

Instead of trying to reverse economic trends, might it not be better to reinforce them by helping and encouraging the man who needs a job to move to the place where someone is anxious to employ him?

Powell often argued that it was foolish to try to stop the drift to the South East. As if the same economic trends which brought workers from Ireland, Scotland and the North to London and the Midlands did not also bring workers from the West Indies and India!
What is worrying is not so much what Powell thinks but that millions of workers follow him on the colour issue. The task of Socialists remains to point out that colour doesn’t matter and that workers have no country.
Adam Buick