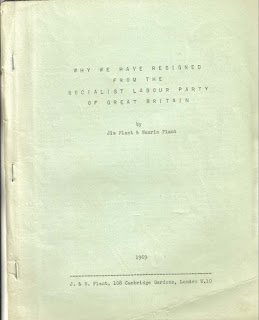 Why We Have Resigned From The Socialist Labour Party of Great Britain by J. and N. Plant  (108 Cambridge Gardens, 1969)

Those who follow American presidential elections closely will have noticed that there is always a candidate for the “Socialist Labor Party”. But they are probably not aware that there is also a party of the same name in Britain which has maintained a precarious existence since its decline in the 1920s. The SLP of Great Britain was originally set up in 1902 by dissidents from the Social Democratic Federation and was one outcome of what has been called “the impossibilist revolt” in the SDF, a revolt which also led to the founding of the Socialist Party of Great Britain in 1904. The SLP gained some support up to and during the first world war because of its militant unionism. Many of its members were carried away by the Russian revolution and a breakaway section was one of the founding groups of the Communist Party in 1920.

Over the years we (and especially our companion party in America) have put forward a careful criticism of SLP policy: its industrial unionism, its De Leon worship, its undemocratic meetings, its exact blueprint of future society and so on. Earlier this year two members of the British party resigned and have published their reasons for doing so. Their pamphlet is interesting since it endorses many of the criticisms we have made. For instance:

2. “The SLP has an opportunist and non-scientific attitude to religion . . . (a revolutionary socialist party) must treat religion as a social question, which it is, and not as a ‘private matter’.”

3. The SLP sees “socialism” existing “on an essentially national scale. It is forever talking about the workers taking over the industries of the nation’ and creating a ‘Socialist Britain’ or a ‘Socialist America’”.

4. “It is not scientific and permissible to lay down an exact blueprint of how future Socialist society will be organised. At most we can enumerate certain basic principles and guidelines, and give an indication in very broad and tentative outline of the way we think society might be conducted. But the exact administrative structure and precise mode of behaviour of people in a Socialist society will be determined by the specific material conditions of that society. What these specific material conditions will be, and how people will react to them, cannot be known to us at the present time.”

5. “Few incidents in SLP history have exposed the Party’s theoretical weaknesses, opportunist tendencies, lack of honesty about its own past and unwillingness to frankly admit mistakes to the full, than its attitude over the years to Soviet Russia . . . By the late 1930s the SLP had become a de facto supporter of , and apologist for, the Stalinist terror regime, albeit a critical supporter and apologist”.

6. “The SLP makes De Leon’s theories and teachings, including the faults and shortcomings, into an infallible doctrine that must not be questioned. De Leon is placed on a pedestal; a higher pedestal than his theoretical abilities and knowledge would warrant, even if it were a good thing to place anybody onto a pedestal.”

The Plants also reveal the undemocratic internal structure of the SLP in America and Britain, and make other criticisms (on the SLP’s attitude to peaceful revolution and participation in demonstrations) that we would not wholly endorse. Nevertheless, this is a very useful pamphlet which shows how correct we have been in consistently opposing the SLP.