Naked Ape or Homo Sapiens? by John Lewis and Bernard Towers (Garnstone Press, 21s.)
This book was written by a supporter of the “Communist” Party, and a Christian. 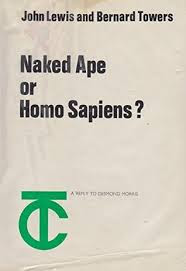 It is published under the auspices of the Pierre Teilhard de Chardin Association.
There is an increasing amount of collaboration between the admirers of Russian capitalism and the Roman church. In this reviewer’s neighbourhood the “Communist” Party recently held a closed meeting with local Christian leaders, to plan common political activity, e.g. against racism. For denouncing this I was called a “sectarian.” These CP members seem unable to see that you cannot fight Capitalism’s consequences by combining with those forces which support Capitalism. (Quite apart from the fact that the CP itself advocates State Capitalism and, like most pro-Capitalist organizations which have been going for any length of time, has found it necessary in the past to publish racist propaganda).
Pierre Teilhard de Chardin was a priest and scientist who wrote some books trying to reconcile religion with science — a hopeless cause. At the moment his ideas are disowned by the dictators in the Vatican, but these wily politicians have often changed God’s mind for him in the past, and will probably embrace Teilhard’s philosophy eventually, in a bid to keep up-to-date.
Surely the weakness of a Catholic-CP alliance could not hamper the simple task of demolishing Morris’s Naked Ape? Yes, the author’s religious approach cannot be concealed. For instance, to criticise the popular press for arousing “baser human appetites” such as “sexual stimulation” and “aggressive behaviour patterns” is the sort of silly platitude which helps to convince people like Morris that opposition to their view of human nature is based on sheer sentimentality.
The many references to Teilhard (as though they were plugging his latest disc) are unnecessary and distracting.
Having said all that, there are some useful facts and perfectly correct arguments here, to refute the human nature myths —though no more than you would get from reading the Socialist Standard for a few months. So let’s have your nine-pences for Socialism, instead of your guinea for the purveyors of superstition.