Capitalism did not collapse

Forty years ago, world capitalism was descending into one of its 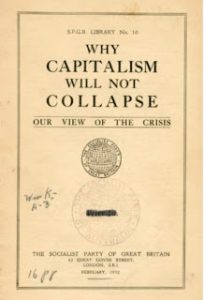 worst ever slumps. So severe and persistent was the depression that the idea grew up, particularly among the “left wing”, that the system was about to collapse. Not for the first time the Socialist Party of Great Britain stood aside from a popular clamour. At the depths of the crisis, in February 1932, we published our pamphlet Why Capitalism Will Not Collapse. This is too long to reproduce here in full but we are publishing in the Socialist Standard an abridged version, the first part of which appears this month.

1. Our view of the crisis
Foreward
We are in the midst of a crisis that is world-wide. Every country feels its ravages. Millions and millions of workers are unemployed and in acute poverty. Everywhere there is discontent and a feeling of insecurity, and the prestige of even the strongest governments has been shaken. All sorts of emergency measures have been hastily adopted, but the depression still continues. Working men and women who usually ignore such questions, are now asking why the crisis occurred, what will be its outcome, and whether it could have been avoided. In some minds there is a fear, and in others a hope, that the industrial crisis may bring the present system of society down in ruins, and make way for another.
I. Fears that capitalism will collapse
The purpose of the Socialist Party is to show the working class the need for a complete alteration in the organisation of society. But our work has been made more difficult by the idea that Capitalism may collapse of its own accord. It is clear that if Capitalism were going to collapse under the weight of its own problems then it would be a waste of time and energy to carry on socialist propaganda and to build up a real socialist party aiming at political power. If it were true, as is claimed, that Capitalism will have broken down long before it will be possible for us to win over a majority for the capture of political power, then, indeed, it would be necessary to seek Socialism by some other means. Workers who have accepted the wrong and lazy idea of collapse have neglected many activities that are absolutely essential. They have taken up the fatalistic attitude of waiting for the system to end itself. But the system is not so obliging!
At first sight there seems to be a ground for this idea. Capitalism from time to time develops acute industrial and financial crises; and at the depth of these it does appear to many observers that there is no way out, and that society cannot continue at all unless some way out is found. Men of very different social position and political convictions have been driven to this conclusion—reactionaries and revoluionaries, bankers and merchants, employers and wage-earners.
Let us go over some of the statements made by those who have foretold collapse, and notice how much alike they are. Notice, too, how each one falsifies the preceding ones. The fact of another crisis taking place is proof enough that the earlier crises did not turn out to be insoluble—the patient cannot have more than one fatal attack.
During the 19th century there were about ten well-marked crises. One commenced in England in 1825. William Huskisson, a former President of the Board of Trade, wrote about it in a letter dated 30th December, 1839:

I consider the country to be in a most unsatisfactory state, that some great convulsion must soon take place. . . . I hear of the distress of the agricultural, the manufactural, the commercial, the West Indian, and all trading interests. . . . I am told land can neither pay rent nor taxes nor rates, that no merchant has any legitimate business. . . . I am also told that the whole race of London shopkeepers are nearly ruined. (“Huskisson Papers.” Pub., Constable, 1931. Page 310.)

Another crisis occurred in the eighteen-eighties, and was dealt with by Lord Randolph Churchill in a speech at Blackpool, in 1884:

We are suffering from a depression of trade extending as far back as 1874, ten years of trade depression, and the most hopeful either among our capitalists or our artisans can discover no signs of a revival. Your iron industry is dead, dead as mutton; your coal industries, which depend greatly on the iron industries, are languishing. Your silk industry is dead, assassinated by the foreigner. Your woollen industry is in articulo mortis, gasping, struggling. Your cotton industry is seriously sick. The shipbuilding industry, which held out longest of all, is come to a standstill. Turn your eyes where you will, survey any branch of British industry you like, you will find signs of mortal disease. (“Lord Randolph Churchill,” By Winston Churchill, M.P. Pub., MacMillan & Co., Ltd., London, 1906. Vol. I, page 291.)

There is one important thing to notice about the two statements quoted above. Huskisson wrote at a time when England was a protectionist country. He was an advocate of free-trade. Lord Randolph Churchill spoke at a time when England had long been a free-trade country. He was an advocate of protection. It is clear that neither free-trade nor protection offers a solution for trade depressions, and that the return to protection in March, 1932, will not prevent further crises.
Of late we have been asked to take a very serious view of the alleged “adverse balance of trade,” by which is meant that this country has had more imports than exports, with the consequence that debts have been incurred abroad to the extent of the excess of imports. The facts are still the subject of argument, but it is not necessary to go into that question. All that we need to remember is that the fears about the “adverse balance of trade” are not new.
In a paper read to the Royal Statistical Society on December 19th, 1876 (see “Trade, Population and Food,” by S. Bourne, pub. G. Bell and Sons), Mr. Sidney Bourne, who for many years was in the Government Service, engaged in the compilation of trade statistics, painted an alarming picture of Great Britain’s trade. He argued that serious consequences would follow if the adverse balance (which he pointed out was then in evidence) was allowed to continue. He mentioned, too, the considerable and influential body of political and public men who shared his views.
After making the adjustments he considered necessary on account of income from investments owned abroad by British subjects, and the so-called “invisible exports” (i.e., the services, such as shipping and financial services, that are paid for by foreigners, but which do not take the form of actual articles passing through British ports), he declared that there was an “adverse balance” in the years after 1872.
He said:

In 1872 the true excess would seem to have been on the side of exports rather than imports, to the extent of nearly £4,000,000; but in the following year the imports again predominated, and have continued to do so with increasing weight up to the present moment. (Page 69.)

Mr. Bourne, like many modern observers of the course of trade, was apprehensive about the future:

I firmly believe that Britain now stands tottering on the eminence to which she has attained, and that it rests entirely with her sons whether a further rise or a rapid fall is to mark her future history. (Page 75.)

II. The Idea of a Blind Revolt of the Workers.
The defenders of Capitalism who have been panic-stricken in times of crisis, have sought for ways to save the social system, which they believed to be in danger. On the other hand, many who desired Socialism have looked at industrial crises not with fear but with hope. They have though that in a time of great unemployment and distress the majority of workers, although not socialists would be forced by their sufferings to revolt against the capitalists and their government, and that they would place in power a government which would try to remould society on a socialist basis.
Similar ideas are held by members of the Labour Party and Independent labour Party, and they were handed down from the Social Democratic Federation to the parties that in 1920 became the Communist Party of Great Britain. It is indeed probable that the Russian Bolshevist leaders, many of whom hold these views, learned them during their exile in England round about the beginning of the century.
In the October, 1931, “Labour Monthly” (just before the General Election), Mr. Dutt, the editor, wrote in a manner indicating the utmost excitement at the likelihood of a decisive crash: “The fight is here,” “the crisis marches on relentlessly,” “it is the whole basis of British Imperialism that is now beginning to crack,” “the whole system is faced with collapse,” “the hour of desperate crisis begins”; and much more to die same effect.
Mr. James Maxton, MP., putting the I.L.P. point of view, has been as confident as the communists. He made a speech at Cowcaddens on 21st August, 1931, reported as follows in the columns of the Daily Record,” 22nd August, 1931 (reprinted in “Forward” 12th September):

I am perfectly satisfied that the great capitalist system that has endured for 150 years in its modern form, is now at the stage of final collapse, and not all the devices of the statesmen, not all the three party conferences, not all the collaboration between the leaders, can prevent the system from coming down with one unholy crash.