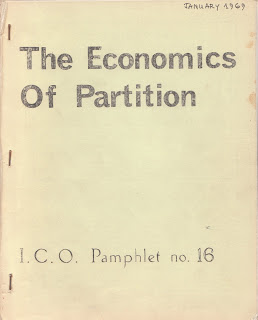 This pamphlet, by a group of Irish Maoists, is a surprisingly good Marxist analysis of Irish history and politics. You have got to take into account first the terminology—imperialism, the nation, democratic people’s struggle—the assumptions behind which are unacceptable. This done, what emerges is the kind of analysis we ourselves have made for years: that Partition arose out of the uneven development of capitalism in Ireland and the consequent conflict of interest between rival sections of the Irish capitalist class, mainly over tariff policy.

Up to the nineteenth century it was the North that was the backward port of Ireland while industry flourished in the South. After (though not because of, as many Irish nationalists were to assert) the 1802 Union with Britain, industry actually declined in the South while it grew in the North East. The basic reason for this was economic: the different systems of land tenure in the two parts of the country. In the South most of the peasants were tenants-at-will on short one-year leases which gave them no security of tenure nor any incentive to improve the land (since the landlord would benefit by increasing the rent). But in the North, under “Ulster custom”, the farmers had won security of tenure and, freed from oppression by rack-renting landlords, were able to accumulate the money to develop capitalist industry.

Northern industry, however, served not the “home market” of Ireland but the British and imperial markets. Northern I industry was in fact a part of British industry. The petty capitalists of the South, on the other hand, wanted protection from British competition so that they could grow bigger. The stage was thus set for a fundamental conflict of interest between the big capitalists of the North East and the smaller capitalists of the South.

When Home Rule became a big political issue because of the support given to this demand by a majority of Irish people, the Northern capitalists won the support of a majority in their area by stirring up Protestant anti-Catholic feelings (“Home Rule is Rome Rule”) and threatened physical force to resist incorporation into a Home Rule Ireland. They were determined not to be cut off from the imperial markets and confined behind the tariff barriers the petty capitalists of the South wanted.

Faced with this determination the British government retreated and in 1914 proposed Partition. This was acceptable to the North, but it took until 1922, and a guerilla war, before this was accepted by most of the South.

The Border was thus just a tariff barrier between the British imperial market and the Irish home market. The Partition question is thus, say socialists (but not the ICO), of no concern to the working class. It makes no difference to them whether they are ruled from Dublin, Belfast or London. The World Socialist Party of Ireland is in fact singled out for specific criticism for its attempt to “by-pass” the Partisan issue. “Denying the fundamental importance of the Border” is denounced as a “blind alley”. Of course it is important to explain why and how the Border came into being but, once you have shown that it is just a tariff barrier, it should be dear that is of no concern to the workers, that it is not something they should get worked up about or should kill and die for. We stand by what we said in 1949 and challenge the ICO to deny it: