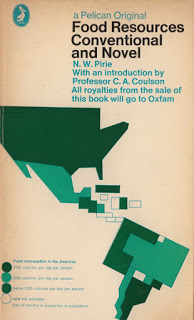 Dr Pirie is head of the biochemistry department at Rothamstead Experimental Station. His short book gives brief indications of some of the possibilities for developing food production in such fields as polar agriculture, distillation of sea water, and the farming of the sea.. He also mentions research on new crops which could revolutionise farming (and eating) as much as the potato did in its day.

But Dr Pirie recognises that there is more to the problem of world hunger than simply producing more food. After all, what is the point of building vast glasshouse systems to grow vegetables during the brief but hot summers in such places as Alaska or Tadzhikistan when in the United States more than 33 million acres of fertile land is now withheld from agriculture because of ‘overproduction’? Or what is the point of India soon having the potential to produce 1.9 million tons of fertiliser a year when the road system throughout the sub-continent prevents efficient distribution ?

As a trained scientist Dr Pirie understands that “the work of charitable foundations such as Oxfam is magnificent and it has relieved a great deal of human suffering, but it is essentially palliative and does not get to the root of the matter”. What is really needed, he says, is political action. So why is he donating all the profits on the sale of his book to Oxfam? Presumably because up to now he has seen no worthwhile political alternative to Oxfam’s well-meaning but feeble attempts to palliate capitalism.

This, then, is our job. To explain to thoughtful and involved individuals like Dr Pirie that only Socialism will liberate man’s ability to produce a world of abundance—and also to make use of the information which experts like him can supply us with. In their way, books like this are bombshells to capitalism—and socialists have the detonator.