The Republican Constitution in the Struggle for Socialism by E. M. S. Namboodiripad Asia Publishing House 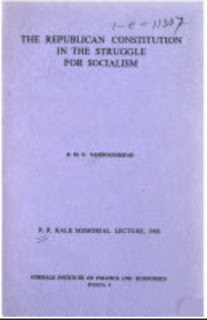 This pamphlet is the text of a lecture given last year by the Chief Minister of Kerala, a leading member of the ‘Communist Party of India (Marxist)’, set up in 1964 as a breakaway from the pro-Moscow party but recently forced to expel pro-Peking elements who wanted to start a guerilla war. It is a treatise on the ‘constitutional way’ to state capitalism on the Russia/China model. As fits a member of a party caught in the middle, Namboodiripad skilfully sits on the fence, saying that political democracy is useful to the workers as it lets them organise but doubting whether his party could win power peacefully, at least not until India’s present constitution is considerably amended. He goes on to suggest the necessary amendments.

What has this to do with Socialism? Nothing. Namboodiripad makes it clear that his party’s immediate aim is not even the State capitalism he mistakenly thinks is Socialism but only a ‘people’s democratic government’ of, presumably, capitalism. If that’s all the ‘left-wing communists’ can offer, what must the ‘right wingers’ be like?

The CPI(M) does not aim at Socialism, but even if it did it is not by examining paper constitutions that one can assess the chances of establishing Socialism by peaceful means. Only by looking at the way political institutions really work, and how they might work in the presence of a determined socialist majority, can this be done.

There are two aspects to this question. Can political power be won by peaceful means? And can that power be used to establish Socialism without violence? The Socialist Party of Great Britain has always answered yes to the first, and to the second, that if the opponents of Socialism use violence to resist its establishment the socialist majority have, in the state machine, the means to deal with the situation. We do not base this view on a study of constitutional law but by taking into account such real social and political factors as the effect of universal suffrage and public opinion on the behaviour of modern governments; the overwhelming numerical superiority of the working class; the complexity of the modern state; and the likely effect of a mass Socialist movement on a capitalist government and on all workers, including those in the civil service, the police, and the armed forces.

We stand for democratic political rather than strictly constitutional action. If, to take a silly example, the House of Lords tried to stand in the way of an elected Socialist majority or if the courts ruled that it was illegal to take over the capitalists’ wealth without compensation, that would not hold us up. The Socialist majority in and out of parliament would just ignore them, even if it were unconstitutional to do so.

We emphasise democracy to show we hold it essential that before Socialism can be established a majority of workers must want and understand it As long as the real political institutions more or less allow a majority to have their way we are not too concerned about the exact wording of the constitution. Certainly the opponents of Socialism will not be able to shelter behind any ‘entrenched clauses’ guaranteeing ‘the right to property’ (that is, to exploit labour) which most constitutions—including, to Namboodiripad’s annoyance, that of India—have, in a bid to stop Socialism.