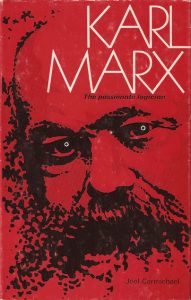 In a preface Carmichael refers to Bolshevism as a branch of the world socialist movement and to China being helped by Marxism “onto a socialist course”. He adds that “doubtless almost half of mankind today is under the direct effect of various interpretations of Marx’s ideas”. Since the core of Marx’s ideas is the abolition of the wages system, and the end of the state machine which he regarded as an oppressive instrument of class rule, how can anyone look at Russian and Chinese state capitalism as interpretations of Marxism? This cardinal misrepresentation is repeated elsewhere in the book.

Carmichael sets out to sketch an individual, to deal with Marx’s life rather than his ideas. But the one useful aspect of Carmichael’s book is in the second chapter on the influence of Hegel. Dialectics is explained in a clear and simple way, which is far from usual. He goes on, however, to make Marx an economic determinist. This is the most common of all misunderstandings of the materialist conception of history. The well-known statement of Marx that “the ideas of the past weigh like a nightmare on the mind of the living” shows that he took other factors into account to explain men’s ideas and actions.

Marx’s Capital is dealt with as though it were something he wrote in order to justify preconceived theories. He is accused of tailoring the facts to fit his ideas, which, outside his egotism, had no real relevance.

Carmichael goes outside the sphere of commodity production to show how things like vintage cars increase in price regardless of labour time spent in producing them. He also writes as though Marx were unaware of the effect of supply and demand upon prevailing price levels.

How little Carmichael understands what he has read of Marx can be seen in his bland assertion that Marx said the introduction of new machinery causes profits to fall. Marx distinguished between the rate of profit and the mass of profit; a moment’s reflection will reveal the significance. Yet Carmichael naively asks “how any capitalist could be so foolish as to spend money on machines that are bound to decrease his profit.” How foolish indeed, Mr. Carmichael!

Another of Carmichael’s claims against Marx is that increasing misery has failed to materialise but that rather the opposite has happened.

Most people have learned to live with so many affronts to their humanity that they fail to realise the abject misery with which capitalism surrounds them. Vast stockpiles of hydrogen bombs, hundreds of thousands of children dying from starvation while crops are destroyed, millions in the world’s richest countries living in squalid, rat-infested slums.

Marx’s illustration in which he compares houses in a neighbourhood and the changed attitude when a palace arises beside them shows that he regarded poverty as relative. It is the ever-growing disproportion between socially potential abundance and actual deprivation against which increasing misery must be understood. That capitalism has disastrously failed to harness its immense industrial and scientific resources for the benefit of all mankind, or to any end other than the quest for profits, must be obvious to any objective observer.