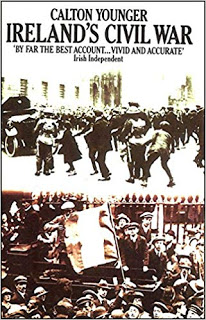 Calton Younger gives here a detailed and factual account of the events which finally erupted in a cruel and merciless civil war.

Probably his greatest failing is the identifying of the years from the 1916 Easter Rising to the civil war in 1922 with “revolution’’ and, as he suggests, the inevitability of civil war after “revolution”. This may be true of “bloody revolutions” but there was hardly anything revolutionary about the 1916 Rising. James Connolly was the only one of the insurgent leaders who was acquainted with revolutionary ideas but he erroneously believed that an Irish republic and socialist society were compatible, and this, together with the fact that he was an influential leader, probably accounts for why he involved himself in a purely capitalist venture.

The British Government’s policy of staggering the executions of the 1916 leaders over a number of days is classed by the author as sheer stupidity. Younger fails to see it as the desperate effort of a ruling class to stamp out dissension from imperialist rule for of course, an independent Ireland would have been a weakness in British defence strategy in the war. The depths to which Lloyd-George, Churchill and the other cabinet ministers were willing to go, were manifest when they sent the dreaded Black and Tans and the Auxiliaries into Ireland to stamp out the raging guerilla war. The I.R.A. could distinguish between British troops and civilians but the British troops, just like the Americans in Vietnam today, often could not distinguish between rebels and other people: when in counter-reprisals they vehemently ravished whole villages and murdered innocent people. This situation was temporarily halted in 1921 when a truce was agreed upon due to pressure inside and outside Westminster.

The negotiations in London (which followed the short-lived peace) between the Irish plenipotentiaries and leading Cabinet Ministers; the reaction of the Republicans to the terms of the Treaty and the civil war that ensued because of the split in the ranks of I.RA, are all described. Various accounts of incidents are given by still-living I.R.A. veterans and much use is made of recently released Cabinet documents. Most of the book tells a sordid story. It should be read by Scottish and Welsh nationalists because it exposes the degradations which the venom of nationalism can lead to.