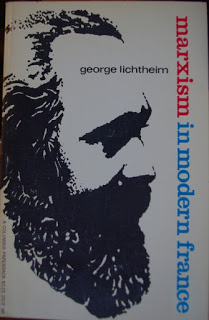 Marxism in Modern France by George Lichtheim. Columbia UP 20s.

France has provided many of the names well-known in the social democratic and anarchist movements: Saint-Simon. Proudhoun, Blanqui, Guesde, Jaurès, Sorel. Before the first world war the antics of reformists like Jaurès made the workers suspicious of parliamentary politics, a suspicion which expressed itself as Syndicalism, the view that the workers could only project their interests by direct action and the general strike leading to a regime of industrial unions.

After the war the bulk of the syndicalist workers backed the newly-formed Communist Party as they believed that Russia really was a soviet union and, of course, Leninism, with its conspiratorial vanguards and armed uprisings, fitted in well with the views of Blanqui. Today the Communist Party is a mass party, essentially reformist, but with a pseudo-revolutionary ideology. Its militants, however, are still influenced by syndicalism; hence their support for occupying the factories in 1968 as well as 1936.

Marx held that Socialism would be the outcome of the class struggle between the workers and the capitalists which would end with the workers winning political power and using it to convert the means of production into the common property of society as a whole. This view was inherited, in grossly distorted forms, by the Communists (PCF) and the Social Democrats (SFIO)who both saw themselves as expressions of the workers’ class struggle for Socialism.

In recent years they have had to face a crisis of theory: workers no longer seem interested in appeals to class and talk of revolution. Some have concluded that industrial workers are now played out as a revolutionary force and that Marx was wrong. The SFIO, characteristically, turned instead to the technocrats interested in extending state control, while the PCF always held in effect that the vanguard party, rather than the workers, would establish “socialism” (read “state capitalism”).

Lichtheim’s book, republished recently as a paperback, discusses both these views and those of their critics in what is a useful guide to French political thought.