Beliefs in Society: The Problems of Ideology by Nigel Harris (Watts, 15s.) 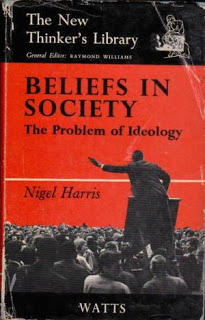 Once you’ve ploughed through the first three, analytical chapters, written in the almost incomprehensible language that is associated more with New Left Review than International Socialism (which Harris edits), this is a very good book.
Harris starts his analysis front the materialist conception of history (“which identifies social classes as the product of a competitive struggle for scarce resources and a social division of labour: the most important beliefs within society are seen as related to this basic struggle, and thus to class”). Ideologies, or systems of beliefs, “relate to the arena o! social conflict, to the purposes of groups competing for scarce resources”. They don’t come from nowhere and to no purpose. As examples, Harris takes British Conservatism. Russian Marxism-Leninism (so-called), and Asian, mainly Chinese, nationalism.
He shows how Marxism, originally a theory of the self-activity of the working class in the industrialized parts of the world, became “the conservative ideology of a new class society, a body of formalized doctrine designed to justify the existing nature of society and to leave complete freedom of action to its leaders”. The only criticism we would have of this chapter is that Harris plays down the difference between Marx’s views of the self-emancipation of the working class and Lenin’s advocacy of a vanguard party as a necessity even in advanced capitalist states. Indeed Harris almost denies that this was a central part of Lenin’s political theory. But if it wasn’t, why did the Third International lay it down as an organizational must for all its affiliates? Despite Harris’ protests, Lenin did pave the way for Stalin.
Harris re-iterates that for Marx Socialism was not “a tactic for forced economic development under State control” but a society in which the working class will have achieved its freedom:

Now Marxists identified the industrial proletariat as the sole agency for achieving socialism (and therefore, socialism was only an appropriate aim in developed countries where the proletariat was a majority), not just because it was poor, but because of its role within the economy, because it sustained and developed the industrial economy by its own efforts, because it was concentrated and organised in the major cultural centres, because it learned discipline and the advantages of interdependence, because by its experience it had the ability to run the economy.

Thus to be used by people, such as the Chinese Communists, working in predominantly peasant countries, with no working class to speak of, Marx’s views would have to be revised. Inevitably, in a retrograde manner. In China the result was a theory, disguised in Marxist terms, very similar to the pre-Marxist Narodnik (or Populist) revolutionaries in Russia against whom Plekhanov, Martov and Lenin had argued.

What would this “regression” entail? A belief that the intelligentsia plus peasants could produce a revolution: that revolution could create socialism; that ‘nationalism’ completely encompassed socialism, that the ‘people’ encompassed the proletariat, and that the local national struggle was the key to the progress of mankind; that the country concerned could industrialise without undergoing capitalism; that socialism was a peasant way of life rather than an emancipated developed society.

Mao has revised Marxism to such a degree that it cannot really be considered to be merely a local “application”: the essence has disappeared. What constitutes revolution is not the most advanced urban masses securing their own emancipation by their own efforts, but guerrilla warfare by the least advanced rural groups, operating outside the ordinary social structure over many years, in order to seize power and begin industrialisation. A would-be ruling élite, dispossessed and alienated from the status quo. within a decaying agrarian social structure, fits naturally into Maoism, although even more naturally into Castroism which was not part of Marxism-Leninism in its revolutionary phase in Cuba. Activism and populism provide the dominant themes.

“Guerrilla warfare”, Harris points out. “takes us straight back to Narodnik thought, to the revolutionary minority seizing power in the name of the people—despite the people—to the traditional coup d’état rather than social revolution”.
This is exactly the analysis we in the Socialist Party have made, but we are more consistent. Such guerrillas are enemies of the international working class, to be denounced as such. Harris (though not in this book) gives them, e.g. the so-called National Liberation Front in Vietnam, “unconditional” support. Why? He’ll have to do better than say Marx supported some nationalist movements in the 19th century, for the simple reason that the 20th century is not the 19th century.
Adam Buick