Experiment in Industrial Democracy by Flanders, Pomeranz and Woodward (Faber and Faber, 45s.) 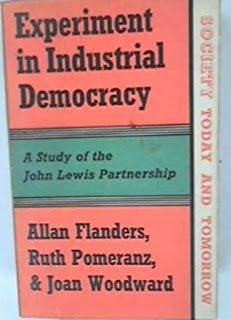 This book studies the John Lewis Partnership, a group of department stores and supermarkets employing 17.000 people, that has for fifty years run “an experiment in industrial democracy”. Its introduction did not come as a result of pressure from below. Rather it was the brain-child of Spedan Lewis, the son of a store-owner. The scheme was introduced at Peter Jones, an unsuccessful shop Lewis had taken over from his father. Spedan Lewis believed his father’s shops had prospered by giving good value. It could be improved “if more of its resources were allocated to better pay and conditions, which would attract good workers and encourage them to work well”. The scheme succeeded and was extended to the stores he inherited from his father in 1928. The group has continued to prosper so that:

Turnover has more than doubled over the past ten years, and profits have more than kept pace . . . Partnership department stores have also been more successful in increasing sales than comparable stores outside.

In a society where goods arc produced to be sold with a view to profit, success can only be measured in terms of sales and profits. In this respect Lewis’ scheme has made the grade.
What about the “industrial democracy”, then? It consists in the main of elected councils, journals, profit-sharing and welfare schemes. The study shows that employees are more concerned with questions of wages and working conditions than with commercial policies. In fact they have the normal attitude of workers rather than of “partners”. Not that we would expect it to be otherwise. The workers’ attitude to trade unions is fairly representative of the industry. Few of the shop workers are believed to be members of USDAW. while the most highly organised are the central London delivery van crews in the TGWU.

The profit-sharing part of the scheme comes up against the same snags in that the workers, having to look after their daily needs, tend to sell the shares issued them. So that whatever the intentions of the firm, it forms part of their wages rather than a stake in the company. Partners opt out:

The partnership now operates a licensed stock-dealing pool which handles small transactions and arranges to place the considerable quantity of stock which is ‘renounced’ each year .by partners as soon as they become entitled to it.

One table shows that in January 1966 £13,999,090 or 29.5 per cent of the firm’s capital was issued to outside investors. £5,136.120 was 5 per cent Second Cumulative Preferred Ordinary Stock “most of which was originally issued to the partners under the profit-sharing scheme”. This benefits the business and safeguards outside shareholders as follows:

This part of profit-sharing mainly takes the form of shares which provide a continual flow of new capital, and which rank last in the capital structure, so that the Partnership can offer the best possible security to outside investors, while remaining independent of them for a considerable part of the fresh funds required by an expanding business.

In practice the scheme has served as a means of regulating the employer-employee relationship to get the co-operation of the latter for the benefit of the former.
Capitalism nowadays needs an efficient and enterprising working class running production. Their participation in making decisions has to be tolerated to the extent that it aids the smooth running of industry. It is nonsensical to think in terms of industrial or political democracy in isolation from social activity as a whole. Only in a society which the means of life are held in common will democratic control by society over its affairs be achieved.
Joe Carter