Book Review: What is Black Power 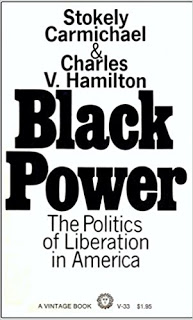 short book is a readable account of what is probably the mainstream outlook. It contains little that is new but it is a compact statement of the aims and ideology of the bulk of the movement.
There is no point in repeating our analysis of “Black Power” which has already appeared in Socialist Standard (February 1968) but two points can be emphasised. The first is that although men like Stokely Carmichael loudly claim to “reject the goal of assimilation into middle-class America”, the fact is that—despite all their noise— their doctrine does fit in neatly with capitalist concepts. Thus:

“Black Power means, for example, that in Lowndes County, Alabama, a black sheriff can end police brutality. A black tax assessor and tax collector and county board of revenue can lay, collect, and channel tax monies for the building of better roads and schools serving black people.”

Secondly, given the right time and place. Carmichael and his associates will attempt to tart up their theories with the usual pseudo-Marxist jargon. At the OLAS conference, for example, he argued that it was the people of “the third world” who were being super-exploited by Western imperialism and that white workers in the imperialist countries were in the ranks of the exploiting class.

“The American working class enjoys the fruits of the labour of the Third World workers.”
“The proletarian has become the Third World; the bourgeoisie is white, Western society.”
“Thus did the United Slates anticipate the prophecy of Marx and avoid the inevitable class struggle within the country by expanding into the Third World and exploiting the resources and slave labour of people of colour.”

The basis for this line of thinking is the obvious fact that workers in the “underdeveloped countries” (and in the underdeveloped areas of the metropolitan countries) do have a lower standard of living than workers in Western Europe and the United States. But Carmichael then proceeds to the quite false assumption that there must inevitably be a direct relationship between poverty and degree of exploitation, that the more destitute a section of the working class is the more heavily it must be exploited. The influence of Lenin’s theory of imperialism is clearly very strong here but to drag in the name of Marx as a prop for this unscientific view is dishonest. In Capital Marx made it quite plain that he understood that there was no automatic link between low wages and intensity of exploitation. Apart from the often-quoted statement in volume I that “as capital accumulates, the lot of the labourer, be his payment high or low, must grow worse”, Marx deals with this issue specifically in volume III- in the theoretical section on the different composition of capitals.
Marx’s method here is to compare a European and Asian country and he suggests that in an advanced industrial state the rate of surplus value (the ratio of surplus value to wages) may well be 100%, i.e. the worker may well work one-half of the working day for himself and one-half for his employer. On the other hand, under more primitive conditions of production, it may well be necessary for a labourer to work for, say, four-fifths of the working day in order to produce an equivalent to his wages, leaving only one-fifth for his employer. In this latter case the rate of surplus value would then only be 25%.
However, this condition of the better-paid worker being more heavily exploited can be masked by a lower rate of profit in the European country, due to the different compositions of the national capitals.
But the point which socialists would stress is that it isn’t a question of which section of the working class has the edge on other workers in terms of being exploited, anyway. Working men and women all over the world are confronted by a situation where the international capitalist class monopolises all the important means of producing wealth. The only way out of this dilemma is for the working class to convert the means of production into the common property of a world socialist community. If the ideas of the Black Power merchants are theoretically unsound, this is a sure sign that, as a guide to working class action for socialism, they are equally bankrupt. Against the call for “Black Power”, socialists will continue to advance the slogan: “Workers of the World, Unite”.
John Crump