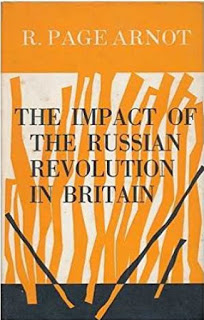 The Impact of the Russian Revolution in Britain, by R. Page Arnot (Lawrence and Wishart, 45s.)

Page Arnot’s book is a well-documented account of the way events in Russia in the period 1917-1921 were received in Britain—the reactions of the government, the Press, political parties and trade unions. It deals with the Communist seizure of power in Russia, the new government’s withdrawal from the war with Germany, its handling of desperate economic problems, the civil war, and the armed intervention by the British and other governments, and shows in parallel how different groups in this country opposed or supported the Russian Government, organised protest demonstrations and so on.

Undoubtedly in 1917 large sections of the propertied class were badly frightened (just as their predecessors had been at the time of the French Revolution) by the thought that the example of the overthrow of Czardom and confiscation of property, added to war-weariness and industrial strife, might endanger property rights in Britain. Even if they had known then (and most of them did not) that in the long run Russia just like France, would settle down as part of the world capitalist order, they would have feared that in the short run they could expect a few very troubled years. This book will help those who want to recapture the political fears and hopes of the time.

What it lacks is an understanding by the author of what was really emerging out of the confusion of those early years. He shared the common delusion that 50 years ago Socialism was just about to emerge in Russia, Britain and elsewhere.