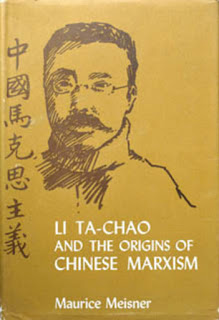 Li Ta-Chao and the origins of Chinese Marxism by Maurice Meisner (OUP. 40s.)

The dust cover of this work claims importance for Li Ta-Chao “as a Chinese interpreter of Marxist theory”. A co-founder of the Chinese Communist Party and a principal leader until his arrest and execution in 1927, it is claimed he was the first to “adapt Marxism to the Chinese historical environment”.

This is a scholarly work, of great interest to Socialists, in which three points are apparent. First, that the author’s understanding of Marxism is better than was Li Ta-Chao’s. Second, that the author considers present day China to be communist by Marxian standards. And third, an admirable development of the life and thought of Li Ta-Chao which demonstrates quite conclusively that he never understood or accepted the three basic tenets of Marxism—the Materialist Conception of History, the Theory of the Class Struggle, and the Labour Theory of Value.

Apparently Li “expressed ‘great regret’ that Marxism had been erected on so shaky a foundation as the Labour Theory of Value”. “In Li Ta-Chao’s hands” says Meisner “the theory of the class struggle tended to break away almost completely from its socio-economic moorings and to become almost wholly centred upon the element of consciousness”. In fact Li developed the class struggle into the concept of the “proletarian nation” to fit with his lifelong patriotic sentiments, a far cry from Marx’s “the workers have no country”. Li’s views of history were so un-Marxian as not to consider that only at certain crucial times social and political conditions make revolution possible. To the contrary, he held that conscious human action could shape historical reality in a series of equally significant “nows”. This belief leads him to the point where he could clear by bold leaps, eventually through peasant uprisings, the obstacles offered by successive phases of China’s development, to the point where Socialism would be achieved without passing through a capitalist phase.

It might appear that this work is in the general run of biographies of Leninist leaders. Whilst this is true with regard to the vaccillations of Li Ta-Chao’s life and thought it nevertheless has certain redeeming features, not the least of which are the explanation of the vaccillations, and the reasons, so much in the ‘communist’ mould, for the adulteration of Marxist theories. Further, there are one or two admirable precis of Marx’s position, and the explanation of these vaccillations, and nature of the Materialist Conception of History.

However, this work does raise an important question—the definition of a Marxist. Meisner intimates the answer when referring to Lenin’s concepts of party organisation and the principle of ‘democratic centralism’ as having “no organic relationship to the Marxist tradition and could exist quite independently of Marxist premises”. Li Ta-Chao, like other Leninist leaders, acted and thought in line with non-Marxist premises, as conditions in Russia and China substantiate. A better title might therefore have been: Li Ta-Chao and the origins of Chinese Bolshevism— and may we hope a future title from Meisner’s pen may be: Ch’en Tu-hsui (Li’s rival for the leadership of Chinese CP), a Chinese Menshevik.