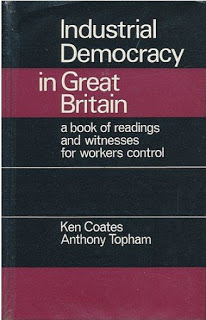 Industrial Democracy in Great Britain. edited by K. Coates and A. Topham. Macgibbon and Kee. 63s.

It is insolent of those who idealise industrial action to link this, as Coates and Topham do, with Marx. For Marx held that, necessary and useful as industrial action was, what it could achieve was limited; to end wage slavery the working class should take political action to convert the means of production from class to social property. The industrial side of the class struggle is thus in a sense subsidiary. This book is a collection of writings advocating a greater say in industrial administration for workers on the shop- floor and, frankly, is uninteresting. The authors’ comments are mealy mouthed and in places inaccurate. We are told that lames Connolly “split the old Social Democratic Federation to form a new Socialist Labour Party”. This move was in fact an expression of the dissatisfaction of the younger SDF members; it is quite wrong to attribute the founding of the SLP to Connolly. Another sign was the founding in 1904 of the Socialist Party of Gt. Britain — not mentioned, of course.

Workers have no special power “at the point of production”. The real seat of power is what controls the government machine and capitalist power rests on their control of this. Industrial action won’t dislodge them. It is significant that Coates and Topham can find nothing to quote on the shop stewards’ movement from 1926 to 1935, a period of great unemployment. All the pre-war items on this issue are from members of the so-called Communist Party — Tom Bell. J. T. Murphy. Tom Mann, W. Gallacher, Wal Hannington and Harry Pollitt — thus endorsing the view that at one time the CP was a revolutionary organisation which went off the rails when it embraced parliamentary action after the war. But the CP has always been an opportunistic party, its only principle being to act in accordance with the interests of Russian state capitalism. Thus they called a meeting of shop stewards in April 1940 to protest against the employers using the war as an excuse to attack working conditions. At another meeting in October 1941 the same people were reported as cheering a man who declared “If a man doesn’t pull his weight in war production then, whether he is a labourer or engineer, he should be put in the army”. We all know what had happened in between! From 1941 to 1947 the CP supported production drives and this only changed when the wartime alliance broke up. One of the pre-war Communists quoted is J. T. Murphy. Murphy was expelled from the CP in 1932 because he would not accept the slogan “‘stop the transport of munitions”; he wanted “credits for the Soviet Union!” Murphy’s following had been built up among engineering workers in eastern Sheffield, an important munition producing area. This incident well shows that the shop steward’s following is based on industrial issues. They don’t carry their supporters with them when they branch out into politics.

Coates and Topham recognise that democratic control of industry will not work if production is still to be geared to the market (look at the co-ops, they say). They know that for this to be effective the market and money must go. Only they fall for the old stepping stone policy:

Given the establishment of a democratically self-regulating industry in a climate formed and dominated by the market, a struggle will begin between democracy and the market.

Once some people thought that nationalisation was a step to Socialism. All they achieved was to bring certain industries under the collective control of the capitalist class via the state. All this talk about “worker’s control” and industrial democracy will probably have a similar outcome: employers will latch on to it as a stepping stone to involving their workers in production problems—with a view to increasing profits.