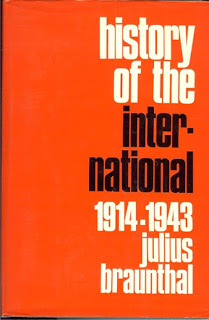 “On issue after issue”, wrote Jack Cohen in reviewing this book in the Morning Star on 18 January, “essential facts and background information and analysis are completely omitted”. He instanced the policy of the German Communist Party up to 1933 (denouncing the Social Democrats as “social fascists”, while helping the fascists to undermine democracy), the Spanish Civil War (murdering thousands of anarchists and trotskyists), the German Soviet Pact (agreeing with Hitler to carve up Poland) and the attitude of the British Communist Party to the war (supporting it for a few days, then opposing it till June 1941, then supporting it again). Of course the so-called Communists do not want people looking at their record of opportunism in the service of Russian state capitalism.

The Communist International was set up in 1919 and to it affiliated those who mistakenly thought that as capitalism was collapsing and that the working class should therefore stage an immediate armed rising. Braunthal says, and this is fair enough, that it was by its Fourth World Congress in 1922 that the Comintern had become a tool of the new rulers of Russia. Its rival was styled the Labour and Socialist International whose members, throughout this period, pursued a more consistent, if futile, policy. They saw their role as not to prepare the workers to take power for Socialism, but to protect the workers within capitalism by supporting reforms and parliamentary democracy. Consistency, to put it mildly, was not something that the Comintern could claim for its policies. At one time they called for armed risings, at another for a “national front” to include all save pro-German fascists.

Braunthal argues that the European Labour movement was so weakened by the split, started by Lenin and perpetuated by the Comintern, that it was unable effectively to resist fascism. But would a united front of self-styled workers’ and democratic parties have stopped fascism? This begs the question by assuming that the Communists were democrats, whereas up till 1935 they were denouncing democracy as useless. Only in the period 1935-9 did they pretend to support democracy and even then, when they shared power in Spain they used it to suppress, torture and murder working class opponents. Why, too, should they be regarded as part of the reformist workers’ movement? Surely they had more in common with the fascists — their contempt for democracy and advocacy of dictatorship, their worship of leaders, their special attacks on financiers, their opportunism and demagogy? How could such people be reliable allies in the defence of democracy and working class interests? As the French Social Democrat, Lucien Laurat, put it: the real social fascists were the Communists.

Braunthal, himself a Social Democrat, is using the Communists as scapegoats for the failure of the Social Democrats’ “lesser evil” policy for resisting fascism: Hindenburg and Dollfuss were not as bad as Hitler and so on. This policy only encouraged fascism. For fascism flourished on discontent and discontent flourishes under capitalism, even in a democratic state. So in rejecting uncompromising struggle against capitalism for a mere struggle to defend democracy (important as democracy is), the Social Democrats were preserving the conditions that cause mass dissatisfaction with democracy. In preserving capitalism, especially since the governments they joined or kept in office failed miserably (as they had to) to make capitalism work for the mass of the people, they too contributed to the growth of fascism.

Braunthal often goes too far in trying to blame the Communists for the suppression of democracy. This is a pity as it means that the wealth of information in his book can not be relied on. He says, for instance, that the Bolsheviks first tried to seize power in July 1917, whereas in fact they were then trying to restrain workers from launching an uprising they thought premature. He claims the 1924 Labour government “fell victim to an episode in the Communist propaganda campaign”. But the Campbell case was only the occasion, and by no means the cause, for the fall. In any event, the British Communist Party gave its unconditional support to all Labour candidates in both the 1923 and 1924 elections. Braunthal makes no mention of this as he argues that up to 1935 the Communists were consistently opposed to Social Democratic parties (save for a brief period in 1922). We who consistently opposed both Social Democrats and Communists know better. But for Braunthal to admit that from 1923 to 1927 the Communists backed the Social Democrats would weaken his basic thesis.

Jack Cohen called this book a whitewash operation. We must agree. Nevertheless it is still worth reading if only to get the Social Democratic view of this period in working class history.