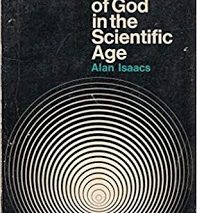 The Survival of God in the Scientific Age by Alan Isaacs, Pelican, 5s.

Socialists are materialists. We see no reason for concluding that a supernatural agency, popularly called “god”, has operated or is operating in the universe. The origin and evolution of the physical world, of life, of the mind, of man and of the idea of god itself can be explained adequately without recourse to the concept of a supernatural agency. As for the so-called ultimate origin of the universe, in seeking this we may well be begging the question by assuming that it has an origin.

Religion claims to be able to prove the existence of an eternal, all-powerful, all-knowing being both from logic and from experience. The arguments from pure logic have long since been discredited Indeed, we might add, though Isaacs does not, that the atheist—who tries to prove the logical impossibility of god’s existence—always seems to fare better, his trump being “Why did a perfect being produce an imperfect world?” Interesting as these arguments may be they really get us nowhere. What we want is evidence. There have been people who have claimed that god or some other supernatural being like the so-called virgin Mary has revealed itself to them. However, their claims cannot be checked and such people are generally either mentally abnormal or ill (psychopaths) or have worked themselves by chanting, self-flagellation or starvation into an abnormal state of mind.

Nobody with the least knowledge of scientific method, would accept such testimony as evidence for the existence of a supernatural agency. Yet millions upon millions of people put faith in such revelations as set down in such books as the Bible, and they do so even if, as in the case of the alleged Christ, there is some doubt that he lived at all.

Why? Why do people not see the so-called religious experiences for what they are, the ravings of psychopaths? Clearly there must be other factors, psychological or social, disposing people to this blind faith. Isaacs concentrates, perhaps too much, on the psychological—the fear of death, infertility and loneliness. We, as historical materialists, would look rather to the social: the function of religion as “the heart of a heartless world” and later as a prop for class societies.

Isaacs covers all this very well and we can recommend this book to all seeking to understand the problem of religion, especially as Isaacs, as Humanists are wont these days, leans over backwards to be fair to religion.

However, for a man so competent at sweeping away religious superstitions in the physical and mental worlds, Isaacs has some odd prejudices about man in society. He holds that leadership, and credulous followers, are necessary for any community to survive; and that no civilised society can exist without coercion and punishment. He is also committed to the views that wars arise from human nature.

Be able to settle down to the massive task of planning its food production, its families, and its resources so that the benefits of human endeavour can be shared equitably amongst its members.

But he suggests that this could only come if the leaders of society change their ways and he’s sceptical about this:

. . . in the event one knows that there is about as much chance of homo sapiens learning to live in peace and prosperity, as there was of homo habilis producing the quantum theory.

So a world of peace and plenty is not possible with homo sapiens. For this we must await the evolution of, quite literally, a new man. This is what comes of reading too much of Julian Huxley! Seriously, though, this is just a sophisticated version of the “human nature” objection to Socialism.

It is possible for human beings, as they are now, to create a world of peace and prosperity. What is required is not a further evolution of the mind, but a change in the basis of society. Clearly the people of the world cannot use the resources of the world to satisfy their needs unless they own and control them. It is only on the basis of the common ownership and democratic control of the means of wealth production that a world of peace and prosperity can be created. For this, men need only apply their existing capacity to reason to the problem and then act to change society.

Isaacs suggests that no society could exist today without coercion and punishment to maintain order. So means are needed, he argues, for “the suppression of greed in the common good.” Ironically, this low view of man has a religious origin. It is a secularised version of the theory of original sin, of the doctrine that man is born evil and so must be tamed to live in society. This argument used as a defence of all authoritarian religion, all government and all class rule. Socialists reject it as a slander on mankind. Man acts from a great variety of motives, conscious and unconscious, but are we justified in arguing that his psychology is a barrier to a free society? Socialists say no. Quite apart from the fact that a man’s psychology cannot be separated from his social background, how man acts depends to a very large extent on the social environment in which he is brought up and lives.

For instance, Isaacs lists three types of defectors which he thinks would have to be dealt with in any society: the instinctive (mentally abnormal people); the emotional (people whose judgement is temporarily blurred by emotion); and the rational (“the professional criminals who I are confident of their ability to outwit the system”). The first two types would exist, in any society, including Socialism, but to deal with them why would there be need of “an elaborate judicial system and an effective police force”? Instinctive defectors are clearly in need of medical treatment or supervision. The best way to deal with emotional defectors would be, as William Morris suggested, to let them be and their “punishment” (if it can be called such) would be their own remorse. But what about the rational defectors, the professional criminals? Yes, what about them? Why in a world in which every member of society has free access to the things needed to live and enjoy life should anyone set about trying to outwit the system?

Thus in a classless world of peace and prosperity the case for a social organ of coercion breaks down. In such a society it would be unnecessary.