What Marx Did Not Mean 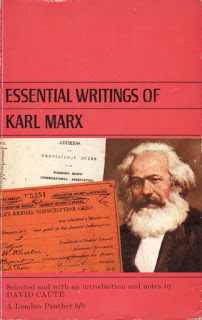 David Caute, we can safely say, is unable to understand what he reads. It is now fashionable to cast Marx as some Great Humanist Philosopher and to use this to challenge his claim to have adopted a scientific approach to the study of society, history and economics. Needless to say, Caute jumps on this bandwagon. In his introduction and notes he emphasises Marx’s early philosophical attitude to Man, the proletariat, capitalism, communism and the state. It is quite true that Marx was greatly influenced by the German philosophers of his day such as Feuerbach and especially Hegel. It was in fact his study of the implications of their theories that led Marx to take up the study of society and political economy. His theories in these fields should be judged on their merits and not dismissed out of hand because of his philosophical background.
Caute, as we have said, is ignorant. Let us give a few examples. He says that, in Marxian economics, “the value of a commodity was to be measured by the quantity of labour-time embodied in it”. As everyone who has the slightest knowledge of Marxian economics will know, this is not so. The value of a commodity is fixed by the amount of socially-necessary labour embodied in it. Even Caute is forced to add that Marx “made some qualifications(!) such as the concept of “socially necessary” which Caute then dismisses as “nebulous” (no reasons given).
Another example of Caute’s slip-shod method is this passage in which, to make any sense of it, the word “labour” has to be understood in two very different senses (and even then it’s not what Marx wrote):

No wonder Caute is unable to grasp the crucial difference in Marxian economics between “labour” and “labour power”.
Caute attributes to Marx the view that “a falling rate of profit is one of the symptoms of a decaying capitalism” without quoting at all from that part of Volume II of Capital where Marx discusses what he calls “the law of the falling tendency of the rate of profit”. But, having read this far, this is what you will have come to to expect from Caute. In this case he’s clearly arguing against the vulgar pseudo-Marxism of pre-war fellow travellers. Perhaps the best distortion is this one:

Nor did he (Marx) regard all labour as productive of value. He excluded the labour of the capitalist, the banker and the merchant. This suggests that his theory of value was not simply, as he claimed, ‘the scientific expression of economic relations of present-day society’ but was also a moral theory.

Quite apart from the fact that Marx was trying to show how people like capitalists, bankers and merchants who did no work were still able to get a living from society, it is no contradiction in Marxian economics to say that if a factory-owner worked in his factory he would be producing value. The case of the merchant and the banker is a little more complicated since the wage-worker in these businesses themselves produce no value but only realise it for their employers. So, if only Caute knew it, some capitalists could produce value while some workers don’t, somehow, if Caute ever read that far. If he wishes to get some idea of what Marx’s theory of value is we suggest he read an article in the LSE journal, Economica, of August 1963 by one of his more academic colleagues Thomas Sowell, entitled “Marxian Value Reconsidered”. Besides, Caute’s bibliography shows that he is not aware of L. Boudin’s Theoretical System of Karl Marx or of Kautsky’s summary The Economic Doctrines of Karl Marx.
There are many other inaccuracies in the presentation of Marx’s views: that what you think depends on what class you’re in; that surplus value exists outside capitalism; that there is increasing “pauperization” of workers; that there was no state or ruling class in Oriental society; that Marx worshipped violence; that a harsh dictatorship would follow the overthrow of capitalist rule; that crises get worse and worse. Caute also thinks that a “Marxist-Communist” revolution triumphed in Russia. It would take a book to sort out all these errors.
This selection of writings of Marx and Engels, like all of them, suffers from the defect that no attempt is made to evaluate the importance and significance of their various writings—the early manuscripts, letters, unpublished notes, publisher works, popular pamphlets and so on. Yet if you want such a handy collection don’t get this Panther Book but get instead the Pelican Karl Marx. Selected Writings in Sociology and Social Philosophy, edited by T. B. Bottomore and Maximiliein Rubel, at less than half the price.
Adam Buick