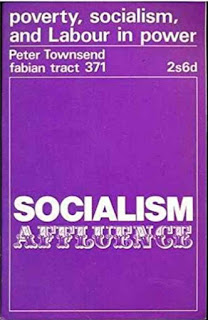 Poverty, Socialism and Labour in Power by Peter Townsend (Fabian Society.)
This Fabian tract is based on a lecture given in November 1966 by Professor Peter Townsend of the University of Essex. It gives ample evidence of the existence of poverty—and worse—says absolutely nothing about Socialism and demonstrates the failure of Labour in power.
Reviewing a wide field—income distribution, retired persons, fatherless families, the sick, the unemployed—Townsend examines housing, education and nutrition. “Not only are the numbers of poor large,” he says, “they are almost certainly growing.”
In Townsend’s view, “By the late 1950’s the Labour Party had begun to develop a coherent strategy for dealing with poverty. Of the statements published . . .  before October 1964 the most radical was probably Signposts For the Sixties.” His proposals are similar to Labour’s: increased family allowances are “most urgent”; he wants general pensions and allowances for “the long term sick and those disabled in civil life”; regular state allowances for fatherless families; the end of the “wage stop” in supplementary benefits and earnings related unemployment and sickness schemes.
Leaving aside the matter of why the Labour Party has failed to solve the problem of destitution, let us ask the question; would the complete introduction of their programme—indeed of Professor Townsend’s — abolish poverty, abolish the economic and social problems of the working class? The answer is no.
Poverty is suffered by all workers, to a greater or lesser degree. Sometimes it comes as bad housing, malnutrition, inferior schools, inadequate clothing or as fear of what the future holds. These problems, which are unknown to members of the capitalist class, spring from the class division of society.
What has Townsend got to say about this? “Structure determines poverty” — without apparently recognising what that structure is. In 1936 (see The Distribution of National Capital — Daniels and Campion) five per cent of the population owned 80 per cent of the national capital; according to Townsend “Real income re-distribution does not seem to have markedly changed since before the war.” Since the cause of poverty is still there, then, the problem will continue.
Why do different workers suffer different degrees of poverty? All of them have the same problem—of getting the best possible price for their mental and physical energies. If they can’t sell those energies they are unemployed. If they can sell, in the long run their wage is fixed by the value of their labour power. Highly skilled surgeons and erudite professors of sociology are paid more than farm workers and builders’ labourers because more effort is needed to produce their particular types of skill.
Workers who suffer extreme poverty —destitution—are those who are unable to work, or whose energies are not in any great demand. Townsend’s solution is to pay lower wages to highly skilled managers and “professional” workers who, he asserts, gain at the expense of the low-wage earners, the children in large families and the sick and disabled.
The short term effect of this can only be, as we said in our pamphlet Beveridge Reorganises Poverty, “a redistribution of misery”. The total poverty of the working class would remain the same. Why does not Townsend suggest rent, interest and profit as a source for redistribution, for increasing low income? Perhaps he recognises these as the source of new capital, so vital to capitalist society.
Townsend does not recognise that the problems of capitalism spring from its basic structure. His tract is but another contribution from one who wants to reform or modify some aspects of capitalism. The only thing to recommend it is the fact that it provides valuable evidence, from a supporter of the Labour Party, that all is not well in Harold Wilson’s heaven. It shows that a Labour government has not eliminated destitution, that “social security” has failed and it supports the case that as long as capitalism lasts poverty will be widespread.
Ken Knight