The reformers of past years thought that as such evils as child labour and starvation in the streets abated so crime, especially amongst the young, would diminish.
Some twenty years of relatively full employment should therefore show a marked decline in all forms of crime by different age groups.
Yet we find such evidence as this, extracted from The Home Office Criminal Statistics 1963 England and Wales. 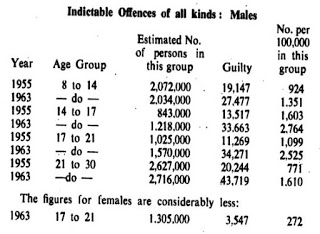 These figures are in fact a source of controversy, especially as they only include the solved crimes. The amount unsolved is much higher although one person can commit many crimes.
About ninety per cent of all crime involves property, even if violence is used. The reasons given for the problem of juvenile crime are varied enough and must be so, as the subject is studied in different areas and at varying times.
Burt & Bagot found, as a result of their surveys in poor depressed areas, that the delinquents lived in standards below civilized requirements. Morris and Jones surveyed new housing estates and rather declaimed the effects of slum conditions. John Baron Mays points out that crime is a group activity indulged in a petty way by children generally. Poor home and social conditions where discipline is low and needs great hardens and develops this. Other groups are by no means immune as our society has strong anti-social trends. He claims that crime arises out of the normal routine of daily life. Durkheim argued that a low crime rate means society suffers from some form of dominant social evil or condition, hence greater delinquency means an economic boom. The Glueck investigation found no evidence of marked poor health in young delinquents whilst others have stressed the contrary. Edwin Sutherland stressed that most cases arise from social factors, subculture patterns and the law-breakers’ inadequate personalities. Talcott Parsons regards delinquents as being deviationists mentally retarded in various ways,
Out of this mass of evidence, which appears confusing and contradictory and in fact is, the effect of the manifold faults in our society and the pressure on people is clearly stated. The point that escapes the notice of the expert is that the various aspects they consider to be important factors in the moulding of the young delinquent are all facets of capitalist society.
No doubt children coming from the environment and raised under the care of very poor parents, as described in Collis & Poole’s work These Our Children, are very much victims of their immediate conditions. In spite of this, capitalism with its army of wage workers has flung up and indeed found it necessary to create, slum houses and slum mentalities. The cases under review are therefore products of some generations of wage slavery carefully nurtured in poverty and ignorance. What of the delinquent who comes from the new housing estates or a nice “respectable” area? We find that in some of these homes the urge to acquire goods and to ensure a status is often at its strongest. Parents sometimes work long hours as the mortgage cannot be deferred like the old fashioned tally man and so the home never becomes a place where one really belongs. The teenager, now established as a wage earner and therefore a consumer, is very much under pressure from new trends in taste and consumption. Thus we get a coincidence of the break-down of home life and a realisation of belonging to a specific age group. The teenager have become well implanted with the concept that they are in some subtle way different from others, their needs and aspirations on a level that is different from the rest of society. Often the delinquent emerges as a social organisation — the Gang, or Mods and Rockers. They are a substitute for failure and must produce by force their own roots. They need inter-gang warfare, damage and vandalism and the Police to hate as a means of perverse social expression. Some often from higher wage bracket homes fall even lower and sink to drug addiction and that peculiar form of modern voluntary vagrancy or sturdy beggars referred to as beatniks.
Our society is riddled with graft, fiddling and place seeking and must remain so in a world of buying and selling. It does not require much pushing to acquire a car by swiping the ignition keys instead of working long hours overtime. We should not make the mistake of thinking the bulk of criminals wax very fat on their misdeeds. They are working class, steal from workers and end their days on what used to be called National Assistance. Like the wealth of capitalism, only a handful amass the millions from a big tickle like the Train Robbery.
Deep emotional conflicts probably do play an important part in many delinquents’ make up but capitalism finds a way out for it as well as often being the major cause. It is so well summed up by Terrence Morris; here is a summary of his words: The competitive society has something of the compulsory game. We are all forced to play and penalized if we do not achieve some success. The delinquent is the person who, unable to win, has sneaked around the back or turned aggressively against other competitors (Listener 4.639).
Mass production of drugs for sale has now made a pill-conscious society. It is not a far step for the unscrupulous to move into an untapped narcotics market, the customers are there ready and willing. It is a fine, business-like thing to sell bombs and flame throwers in order to realise a profit, then why should society be so shocked if someone sells heroin for the same reason?
Finally, if the theories are correct the growth of unemployment under the Labour Government should see a decline in Britain’s crime wave. It is typical of capitalism, that it “solves” one problem by replacing it with another.
Jack Law