Under capitalism wealth takes the form of capital. Wealth is used to produce more wealth not to satisfy human needs but to make profits. Most of these profits are re-invested and in this way capital accumulates. What forces the capitalist to re-invest his profits (rather than consume them all in riotous living) is competition. Each capitalist competes against other capitalists for a share of the market. This means he must run ever faster to stand still. He must use his profits to buy machinery that will cheapen his costs. This has certain technical effects: it leads to an increase in the size of productive units. This competition between capitalist enterprises is the motive for increasing productivity.
But competition has another result. It tends paradoxically to reduce the number of competitors. As the technical process becomes more complex and costly only large enterprises can survive. The weak and inefficient go under and their wealth passes into the hands of those who survive. Thus industry becomes controlled by fewer and fewer enterprises.
This whole social process makes Socialism a practical possibility. Ever-increasing productivity makes a society of abundance possible. Socialised methods of production make the private ownership of socially-produced wealth outdated—and worse, a fetter on production. As control of industry is centralised into fewer and fewer enterprises democratic social control becomes possible. Thus does capitalism prepare the technical basis for Socialism.
Marx, the man who did so much to put socialist theory on a scientific basis, when he was studying capitalism over a hundred years ago discovered this tendency towards the concentration of industry.
A recent study of this subject was published in The Journal of the Royal Statistical Society in 1965 by Alan Armstrong and Aubrey Silberston under the title “Size of Plant, Size of Enterprise and Concentration in British Manufacturing Industry 1935—58”. For this study they used the 1958 Census of Production and previous studies. Their conclusions were:

Output has risen greatly since 1935, but the number of plants has risen much less, and in recent years has been falling. There has been a movement towards fewer, larger plants in most industries . . .  Further the average size of the largest plants, measured by employment, has in general increased, and large plants now account for a higher proportion of total employment in nearly all industrial groups than formerly. The same is true of their share of total output. Finally, plants are, in general, being operated by fewer enterprises, and the extent to which many industries are dominated by a few “giant” enterprises seems to be increasing.

(By plant is meant “premises under same ownership or management at a particular address”; by firm “one or more plants under the same trading name”; by enterprise “one or more firms under common ownership or control”.)
One of their tables, reproduced here, is particularly revealing. 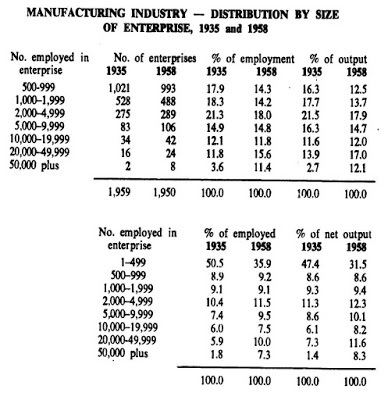 A further table shows the percentage of workers employed by the largest three enterprises in some “industries” (as defined by the Census).

Employment is used rather than output as it is easier to measure. But as the larger enterprises will tend to be more efficient the concentration in terms of output will be greater than the figures given here. For oil refining the percentage is 84; for man-made fibres 81; for sugar between 70 and 91; for Tobacco between 66 and 85; for watches and clocks 70; for margarine between 59 and 75; for steel tubes between 49 and 79; for asbestos 63; and for soap, detergents and candles and linoleum both 60. The top four enterprises in dyestuffs employ 88 per cent of those in the industry and in cement between 71 and 85.

Although both Tories and Labourites praise competition and denounce monopoly they have long since ceased to tilt at the windmills on this point when in office. They accept—and even encourage —the concentration and the centralisation of control of industry. A White Paper put out in January 1966 spoke of setting up an Industrial Reorganisation Corporation just to encourage concentration. The White Paper stated:

The need for more concentration and rationalisation to promote greater efficiency and international competitiveness of British industry, which was emphasised in the National Plan, is now widely recognised.

There is no evidence that we can rely on market forces alone to produce the necessary structural changes at the pace required.

Hence the IRC. There’s no talk of protecting the small man here.
On this point no defender of capitalism can deny that the early Socialists were right, though they will of course deny where it leads: the social ownership and democratic control of the means of production.
Adam Buick