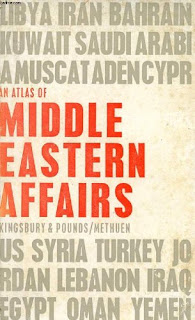 An Atlas of Middle Eastern Affairs by Norman J. G. Pounds and Robert C. Kingsbury University Paperbacks, Methuen, 8s. 6d.
Even before the discovery of its oilfields, the Middle East was vitally important to capitalism. For this area is the crossroads of the world, where Europe. Africa and Asia meet.
The British capitalist class have always had an interest there, as a result of their possessions in India and the Far East and their colonies in Africa. The decline of the British Empire has made little difference to this, for there are still important trading links with many of the old colonies, links which must pass through the Middle East.
But if the British ruling class has an interest in the Middle East, their influence there is all but dead. Suez was perhaps the final act, the graveyard of British pretentions in the area when the United States showed whose word was law.
Suez was also the political—and perhaps very nearly the physical—graveyard of Sir Anthony Eden. It was typical of the Middle East’s long history of conflict, revolving around its strategic and later its economic importance.
Modem civilisation began in the Middle East, in the great fertile river valleys. Now it is mainly a vast stretch of desert, of oil and of corrupt and wealthy feudal rulers. Oil is now the great king; the Middle East has about two-thirds of the world’s entire supply of it.
Kuwait, which was taken under British protectorate in 1899, has almost twice as much oil as the USA. Production started there in 1946, making the sheik —Sir Abdullah As-Salim As Sabah—immensely rich. The protectorate ended in 1961 but the British troops soon came back when the Iraqis tried to take over. This episode was typical of the Middle East, of its deals, its clashes of interest and its military adventures.
A land apart from the oil sheikdoms is Israel, whose per capita income is nearly twice as high as that of its nearest rival, Turkey. Israel with its developing industries, its modern cities, its military forces and its tourism is the harbinger of the capitalism which must develop in the Middle East and which must transform the economic and social set up there.
The University series of Atlases is a useful collection of small guides. The maps are interestingly drawn and their commentaries full of facts. This latest in the series can be recommended to anyone looking for some quick, easily digestible information on one of the world’s most romantic, wealthy, depressed and fought-over places.
Ivan