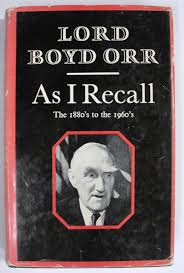 As I Recall by Lord Boyd Orr (Macgibbon & Kee)
This is a fascinating, but also an infuriating, book.
In the introduction, Ritchie Calder speaks of the author’s frustration and anger when, time and again, he was foiled by the profit motive in his efforts to improve the diet of the poorest. He speaks bitterly of his frustrated attempt to get free milk into schools to supplement the children’s impoverished diet, at a time when there was a glut of milk because people could not afford it and skimmed milk was being poured down the drain. He quotes from one of Lord Boyd Orr’s speeches: “half the population of the world suffers from lack of sufficient food; farmers suffer ruin if they produce ‘too much food’. Adjust our economic and political systems to let these two evils cancel each other out.’’
This is why this is an infuriating book. Lord Boyd Orr shows many times that he recognises the responsibility for malnutrition and hunger lies in the capitalist system and yet, even recognising this, throughout his long life and even now, he has sought the remedy within that system.
In the section dealing with his research work, Lord Boyd Orr speaks of the brushes he has had at various times with the Ministry of Agriculture. At one time the Ministry was creating Boards to fix prices of home produced bacon, etc., and to restrict imports. He was opposed to these “because . . . this meant dearer food for the poorer half of the population who were already unable to purchase sufficient for health . . . The Pig and Bacon Marketing Board would mean that there would be less bacon imported from Denmark, and in return we would send them less coal, with the resulting increased unemployment in both countries.” This is a point which still eludes our successive Governments, who preach the gospel that “we” must import less and export more!
In his criticisms of the Agricultural Marketing Board, Lord Boyd Orr advocated a comprehensive food and agricultural policy based on human needs. He pointed out that while the poorest people spent more than 75 per cent of their income on food, the wealthy spend less than 10 per cent. Therefore rises in prices obviously affect the poor much more than the wealthy. In reply he was informed that, as the Rowell Institute (his research institute) was maintained by government grant, the Director should not be allowed to engage in propaganda against his government.
In the chapter dealing with his dietary surveys and wartime food policy, the author speaks of an interview he had with Kingsley Wood, then Minister of Health, who asked him why he was making such a fuss about poverty when, with old age pensions and unemployment insurance, there was no poverty in the country. The extraordinary thing was that Kingsley Wood genuinely believed that if people are not actually dying of starvation, there could be no food deficiency. Naturally he had never put this theory to the test at first hand!
There are many other instances of ignorance or deliberate obstruction and manipulation of facts on the part of “our” politicians. Nevertheless, Lord Boyd Orr can speak with admiration of General Smuts and say superstitiously that “God frowned on our work in Kenya” because two of his friends died there, one through cancer and the other through a motor accident.
When speaking of the United Nations Food and Agricultural Organisation, the author mentions the interest shown by American businessmen in schemes for world distribution of food “from a financial point of view.” However, due to the frequent opposition of the British team who, obviously, could see none of these advantages in view of the preferential tariff and price arrangements of this country with its “ex Empire”, many of these schemes failed.
The Atlantic Charter of 1941 stated as its aim “freedom from want for all men in all lands.” The author speaks bitterly of the fact that, already by May, 1943, at the Hot Springs Conference in America on world food problems, this had , been forgotten. ‘The old men had crept back into power, determined to resist any economic change which threatened their financial interests.” When addressing the delegates at the Quebec Conference he felt that, although the delegates themselves were in favour of his suggestions they, “like the delegates at the Hot Springs conference had been told what to say by politicians who had little interest in alleviating poverty, even in their own countries, and even less in eliminating hunger and poverty in the world.”
In spite of his experiences with succeeding British Governments, Lord Boyd Orr can say “my attempt to persuade Mr. Attlee to become interested in this project was rather foolish. He was doing a magnificent job . . . with many inexperienced ministers to reorganise Britain after the war . . . that he could not be expected to be well informed on what must have considered a side issue of the foreign policy.” Side issue indeed!
The role taken by the British Government at least appears to have been consistent. On one occasion the FAO, having sent a group of agricultural experts to Greece, reported that a grant or loan of 200 million dollars would be sufficient to finance the development plans agreed, to bring about a rapid increase in food production. Instead of the grant. Britain sent troops to support the government and Royal Family.
In summing up, Lord Boyd Orr chafes against the division of the world into opposing camps and sees in World Government. the promotion of which now takes up much of his time, the solution to these problems. His references to “Socialism” and “Capitalism” show why Lord Boyd Orr still places hopes in such an organisation.
Eva Goodman