Capitalism is the system under which profit-seeking is the main 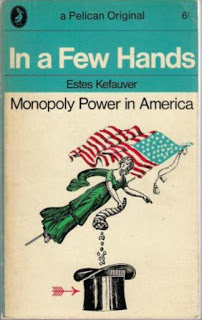 purpose of men’s undertakings; self-interest is the motivating force that drives them. Each person seeks his own maximum gain in an unending struggle. Seller is pitted against seller in the eternal rivalry of the marketplace.
Under this system men would rather see their fellow human beings, women and children, die, rather than forgo any profits. They will, knowingly, sell poison or lethal weapons—provided there is money to be made.
Self-styled respectable businessmen use known gangsters in the struggle for survival. They throw away food in order to reap gold. They lie, cheat and bully with one end in view: profits.

It is rare that we Socialists can take such an indictment of capitalism from the writings of a politician who actively helped the capitalist world go round upon its bumpy axis; a member of the American House of Representatives for nine years, and after that a U.S. Senator; even, in 1956, the Democrats’ candidate for Vice-President.

Yet from a book by the late Estes Kefauver, and with neither unfair quoting out of context nor exaggeration, the indictment of the first three paragraphs above has been taken. His analysis of monopoly power in America, In A Few Hands, has just been published here for the first time as a Pelican Original (price 6s.).

Kefauver, who died in 1963, learned his facts about American Big Business as chairman of the U.S. Senate’s Sub-committee on Antitrust and Monopoly. His book presents the essence of this committee’s extended hearings.

Evidence of the behaviour of the biggest drug firms is especially dramatic, for here we are dealing in human life. For instance, some years ago a drug called Orinase (its trademark) was invented, an oral anti-diabetic drug. Not only is this obviously easier to take than regular injections of insulin; it is also much easier and cheaper to make. But the manufacturer, Dr. E. Gifford Upjohn, kept the price of Orinase at 14 cents per tablet, the same price as insulin. That was his rival, so although the drug cost him 1.18 dollars to produce (for a month’s supply), the patient paid around 12.50 dollars per month. Dr. Upjohn shrugged this price difference off as “just a matter of pennies” before the Senate Sub-committee.

Doctors are constantly bombarded by American drug manufacturers with advertising and inducements to prescribe drugs by trade name, otherwise pharmacists may provide the much cheaper, possibly foreign-produced but equally effective, version. The detail men who visit doctor’s surgeries to persuade them to use particular makes of drug were actually told of one drug, whose effects were known to be fatal in certain circumstances: ‘‘Chloromycetin’s toxicity should not be introduced unless the physician brings up the subject or unless you know that he has ceased prescribing the drug.”

It has been widely publicised of late, thanks to the efforts of Ralph Nader, that most American cars are death traps. Kefauver writes witheringly: “The dictates of the styling engineers take precedence over everything else. Even safety of operation—not to speak of fuel economies—is subordinated to the whim of the fashion experts.”

He is referring here to the “non-price” competition that takes place between America’s few giant car firms.

By contrast, in the bread industry what appears to be real price competition is in fact a rigorous campaign by big, nation-wide bakers to oust smaller local firms. The giants, four of whom already control 22 per cent of the market, will undercut wildly, even making a loss in one area, in order to force the small baker out of business. Other techniques include: acquiring detailed knowledge of the small firm while asserting a serious intention to buy it; using the two American unions notoriously run by gangsters, the Teamsters and the Bakery & Confectionery Workers, to give labour trouble; deliberately making piles of loaves, much of which can only be wasted, for if the small baker competes he faces heavy losses on returns of stale bread, and if he does compete his sales may decline anyway—housewives are attracted by big heaps of bread in the supermarkets.

The establishment of a giant in a town whose industry was formerly run by smaller, local capitalists revives the old story of company towns. Although these are less ugly, and perhaps less crudely run for the company’s benefit than those of 30 and 50 years ago, they become worse places to live in nonetheless.

Local bankers, insurance companies, suppliers of all kinds, lawyers and accountants find themselves supplanted by the men at head office. The few studies of modem “company towns” that do exist show that areas dominated by a few absentee-owned firms suffer from worse housing, schools, and other civic projects. Councils attempting to raise local taxes are warned that the firm will close down, putting most of a community out of work.

Kefauver believes that the cure for monopoly is adverse publicity, government admonition, and keen competition among all capitalists.

He could not see how it is the very nature of capitalism that brings about monopolies. One firm defeats its rivals, and swallows them. How would he stop this? By abolishing free enterprise capitalism? But that is exactly what he wants to see maintained.

A giant is indeed stalking the world today: the ogre of capitalism. Men like Estes Kefauver, who think they can run it are afraid of it. The majority of mankind. the workers, live in its shadow. Few indeed are even aware of this. But only when the workers of the world understand what lies behind their agonies, the cruelties and the wastefulness of capitalism, when they have determined democratically to establish Socialism, only then will the shadow be removed from all our lives.