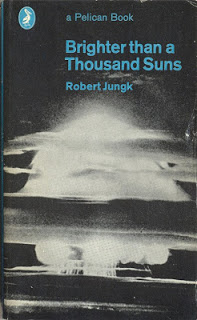 “Talk softly please. I have been engaged in experiments which suggest that the atom can be artificially disintegrated. If it is true, it is of far greater importance than a war.”

Thus spoke Ernest Rutherford to a government defence committee towards the end qf 1918. But at that time, Rutherford probably had little inkling of the type of importance his discovery would assume, just where it would lead, and the monstrous use to which it would be put. “The only way I can tell a new idea is really important is the feeling of terror that seizes me,” said Professor Franck of Göttingen University about three years later. It was perhaps a more apt remark, and in this case at least, fully justified.
We all have at least some idea of the horrors of the atom bomb and of the hideous refinements it has undergone since 1945. What is often not appreciated is the fairly long and gradual process leading to its production. It was certainly no sudden affair, a point emphasised in Robert Jungk’s Brighter than a Thousand Suns (Pelican Books 5/-), the third English edition of which appeared last year. He reminds us that much of the important theoretical work took place in the 1920’s in Göttingen with a team of scientists of world-wide origin, but such was the lack of interest shown by the capitalist class in something apparently lacking in commercial or military possibilities, that the’ work was done on a shoe-string budget.
Many of the early scientists regarded their work as “pure”—something quite isolated from politics and the everyday functions of society. “Knowledge for the sake of it” might have been a fair summary of their attitude and indeed, even after Hiroshima had demonstrated how palpably false such a notion was, Mr. Jungk recalls there were still some who clung to it.’ For example:

To him, research for nuclear weapons was just pure higher mathematics, untrammelled by blood, poison and destruction. All that, he said, was none of his business, (p. 14.)

Which goes to show how ignorant and muddled even the most brilliant of men can be when they do not relate what they are doing to the world in which they are doing it. This book is described as “a personal history of the atomic scientists” and as such, is a history of personal failure, failure on the part of every one of them to learn and apply the lessons of society.
They protested on many occasions the independence of science and the universal right of free access to all available data, and then stuck their heads back into the sands again. Their sentiments sounded all very desirable, but quite impossible of achievement in a world of private property relationships. And with the rise of Hitler, this lofty idea was watered down. Some of the German physicists fled abroad to Britain or the U.S.A. and supported one ruling class or another in the line up for the war which was not far off.
It is old news how “that great friend of peace” Einstein, was approached in 1939 by some of these very scientists, and with them, urged the U.S. government to produce an atom bomb as quickly as possible. They thought—mistakenly as it turned out—that Nazi Germany was working rapidly towards the same goal, and that it would be essential for America to win this terrible race to ensure that such a weapon would never be used.

“Isn’t it wonderful,” Gondsmit remarked, “that the Germans have no atom bomb? Now we won’t have to use ours.” The professional soldier’s retort shocked Gondsmit, for out of his many years’ experience of the military mind, he prophesied: “Of course you understand. Sam, that if we have such a weapon we are going to use it.” (p. 158).

In fact, after the collapse of Germany, the “Manhatten Project” was pressed ahead at a furious pace and the Hiroshima Bomb dropped bang on schedule.
Robert Jungk’s book is worth reading as a masterly survey of events leading up to Hiroshima and for the ten years which followed. He gives evidence which should leave us in no doubt about two things at least. First, that capitalism will pervert and degrade the finest intentions in the pursuit of it’s hideous ends. Second, the futility of the “balance of terror” theory and the support of armaments in the hope .that they will prevent war. After reading this book it is astounding that such a theory still finds favour.
Eddie Critchfield