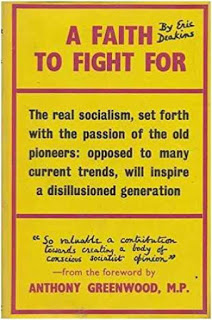 Occasionally the Labour Party dares to refer to itself as Socialist. But what do they mean?.

Deakins has a very simple view of society and politics. Societies are based on Ideals, and the art of politics consists in maintaining or changing the Ideal basis of society. Present day society, capitalism, is based on Immoral Ideals: Socialism is a society based on Moral Ideals. It has an ethical basis: it is

A form of society based on the ideals of individual fulfilment, brotherhood, co-operation, tolerance, justice, charity, equality and service to the community.

The long-term aim of the Labour Party, says Mr. Deakins, is to realise these ideals. To do this it must appeal to the individual’s Moral Conscience. Prompted by their consciences, individuals will come to realise that capitalism is immoral and will take steps to reconstruct society on a Moral basis. Mr. Deakins is, perhaps, not unaware that in order to gain power the Labour Party has pursued an opportunistic policy of fighting on a programme calculated to appeal to the individual’s Self-Interest rather than to his Moral Conscience.
Mr. Deakins’ own personal Moral Conscience seems too reasonably well informed (though it is incorrect on the date of the Taff Vale judgement — 1901 not 1904) and has dictated to him a complete political programme including among other things: land nationalisation, reform of the the Lords, nationalisation of cotton, aircraft and shipbuilding, abolition of public schools, comprehensive schools, opposition to the Common Market and many other policies so well loved by the Labour Left-winger.
Mr. Deakins devotes a couple of pages to a criticism of the position of the Socialist Party of Great Britain.

The S.P.G.B., in its role as self-appointed custodian of the Socialist conscience. insists that Socialism will only come about when the workers recognise that it is in their economic interest to create a Socialist society. There are two grave dangers in this thesis: one being that it is wrong to direct a Socialist appeal to individual conscience, the other being that it ignores the implications of the term “workers.” To appeal to self-interest is to deny the ethical basis of Socialism, and so render its attainment impossible.

Let us clear up two simple points straight away. The Socialist Party does not appeal to individual self-interest but to the class interest of the working class. We say that Socialism is in the interests of the working class and that it is up to them to establish it. Second, Mr. Deakins implies that we are materialists in the “‘parsons’ sense, to the detriment of so-called spiritual values. This is so much nonsense. Socialism will create the conditions for all-round individual development, both practically and intellectually. Mr. Deakins should consult our pamphlet Art, Labour and Socialism by William Morris.
It is, however, true that we do not appeal to morality, that we deny that Socialism has any ethical basis. Socialism is a system of society and systems of society are not based on ideals, “good” or “bad.” A superficial look at history might suggest, for instance, that feudalism was based on Honour and capitalism on Selfishness. In fact, systems of society are based on the relations men enter into in producing wealth. In properly societies, that is societies in which access to the means of production is not free, these relations are class relations. The section of the community having control over access to the means of production are enabled to live off the  surplus labour of the producing class.
Such systems of exploitation would be unable to survive if the various means of social control did not back up the dominance of the privileged class. The state, as the centre of social control, is the most important of these means. The other means of influencing men’s behaviour and attitudes such as religion, morality, literature, art and so on, similarly operate to preserve the system. Thus Mr. Deakins is looking at things upside-down: ideals are not the bases of social systems, rather are they a part of the social superstructure.
When the mode of production changes enough to shift the centre of industrial control, a process is set is motion which sooner or later brings about a change in the entire social superstructure. A new class, brought to prominence by the economic change, organises itself politically to win control of the state. At the same time, new ideas appear in religion, morality and the like, reflecting the interests of the rising class. Eventually the institutions and ideas of the previous dominant class are swept away.
This is how social change comes about and there is no reason to suppose that the change from capitalism to socialism will be any different. The development of large-scale industry has socialized production and brought into prominence a propertyless working class quite capable of running the productive system without the owning class. To complete the change which this development calls for is the task of the working class. If this class is to triumph it must become conscious of itself and organise to capture political power. The task of Socialists is to help such understanding come about by appealing, not to morality or conscience, but to the interests of the working class as a class. Socialism, is thus a class issue, not a moral issue.
The emancipation of the working class involves also the emancipation of all mankind. The working class can free itself only by ushering in Socialism, a self-controlling world community in which production will be carried on purely and simply to satisfy the needs of the community.
The nonconformist conscience helped the capitalist class to power, but a refurbished and secularized version of it is of no use to the working class. Socialism cannot be instituted by a series of measures based on the dictates of conscience. It demands a change in the real basis of society, a social revolution.
Adam Buick