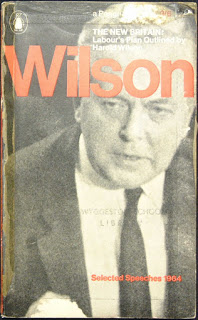 Shortage of all the good things of life is nothing new to a worker, circumscribed as his life is by the size of his wage packet. That’s something no politicians have been able to do anything about, but it certainly does not stop them from promising. In fact, there was certainly no shortage of promises during the recent general election.

Not that the capitalist parties necessarily wait until the election date is announced. The Labour Party had prepared its election programme months beforehand, and it was detailed in a series of speeches by Harold Wilson in the first four months of this year. Nine of these speeches have been reprinted in a Penguin Special: Wilson—Selected Speeches 1964 (3/6d), and after you have read them, there should not be much doubt in your mind whose influence was dominant in the Patty’s subsequent manifesto.

It would be as well to read both documents and then keep them safely preserved for future reference, because workers’ memories are notoriously short and now that Wilson is Prime Minister, we may expect the promise-breaking to start at any time. Let us take a look at some of the pledges in the Penguin Book. First of all (of course) the housing problem. Yes, it’s down for solving for the umpteenth time but what does Mr. Wilson mean by “solving?” Well, among other things there will be many more council houses built for letting—what a prospect; building land will be taken into public ownership and there will be no further rent de-control. Cheap (and nasty) houses for the workers! That is the measure of his “ solution.”

Then there is education. A shrewd stroke this, because Mr. Wilson can point to the severe deficiencies of the present set up, the dreary Victorian buildings and oversized classes in which many working class children are forced to study and the fact that there are not nearly enough teachers to go round. Thirteen years of Tory rule can be blamed for this, thinks Wilson, forgetting that the Tories in their turn inherited the mess which six years of Labour Government had failed to clear up.

We are going to have full employment, too, under Labour. This apparently is going to be assured by expanding production and trade by at least four per cent per year. Exports will be stepped up and industry encouraged to produce many of the goods which are now imported. It will all be done by “ a national plan” — in an unplannable world. The little matter of the anarchy of the capitalist market is something which is cheerfully ignored, but we may be sure that this anarchy will be the excuse —phrased differently of course — which will be trotted out if a recession occurs and the unemployment figures rise.

Mr. Wilson is nothing if not a man of the people, the whole people. That is to say, there is something for everyone in this book. To the Commonwealth more trade and closer links. To the medical profession more doctors, better hospitals and training facilities. To the old age pensioners bigger pensions and free bus passes. To the industrialists an expanding market and reduced labour costs. Yes, he made no bones about wage restraint in his speech at Edinburgh on March 24th. This is one promise which doubtless will be kept:

You can ask for this policy (wage restraint) if production and productivity are rising, you can ask for it if it is intended, if it is envisaged, against the background of a climate of true social justice.

The results of The New Britain under Labour will not be much different from those of the old Britain under the Tories, as far as workers are concerned. That Mr. Wilson is an astute politician is undeniable,. but it will be capitalism which will determine his actions in the months ahead, not his astuteness. It has happened many times before to politicians of all parties, which is why their policies show such remarkable similarity to each other. “Little Sir Echo” is the contemptuous expression which Wilson uses more than once in describing Tory imitations of Labour Policy. Apparently, he is not clever enough to realise just what a self-condemnation this really is.