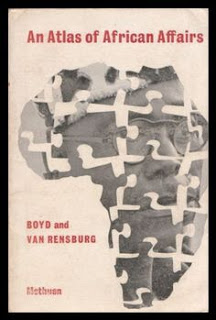 An Atlas of African Affairs by Andrew Boyd and Patrick van Rensburg. Methuen, 14s
Maps are fascinating things and most of us enjoy browsing over them. Andrew Boyd, in this book and in his Atlas of World Affairs, exploits the technique of selectively drawing maps so that they reveal not only the geography, but also the history, of a continent.
This atlas has about 50 maps backed up by a potted history of Africa. Here we can see where the European traders, uninterested in the continents rich interior, set up their coastal colonies. Here, too, are shown the ancient states of Africa: where in 5.000 B.C. one of the worlds first agricultural systems was developed: where in 300 A.D. the Soninke created Ghana, which throve on the export of slaves and gold to Morocco. The great tribes of modern Ghana claim descent from the inhabitants of the ancient state –  hence the revival of the country’s name.
The maps show up the growing European interest in the African hinterland and the scramble for colonies in the late nineteenth century. It is easy enough to appreciate the author’s contention that Africa’s map of frontiers was drawn by Europeans, whose rule lasted for a bare seventy years.
But Africa is more than a bloody history of slavers and colonisers. It is a dark, brooding continent with enormous wealth and great natural barriers of desert and jungle and disease. These are the physical conditions in which the natives and the colonisers must go about their business and which has such a definite effect on that business. The Atlas does not forget this.
A small book, but full of interest and information.
Ivan