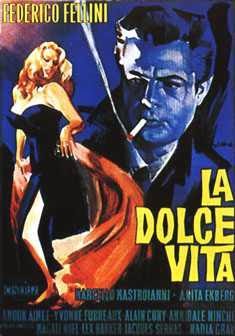 La Dolce Vita, the Italian film now showing at the Columbia and the Curzon, is worth attention. The action is centred in Rome over seven days and nights (a sly dig at the story of creation?). The opening sequence sets the scene for the bitter, searing and uncompromising revelation of our diseased society. A helicopter is carrying an effigy of Christ low over Rome followed by another occupied by a newspaper reporter and photographer. Subsequently we learn that these two are attached to a scandal-mongering tabloid but we surmise that in the meanwhile that this is a stunt and that the occasion is one of the not infrequent religious holidays. Suddenly we see St. Peter’s Square below. Thousands are gathered receiving benediction from the Pope. We are left in no doubt of the relationship of the events—two stunts both concerned only with a cynical exploitation of ignorance, fear and uncertainty.
That evening we see the same reporter in one of the more exclusive night-clubs of Rome smelling out sensation and scandal and noting the useless itineraries of the notables of “society”. Eventually he finds himself alone in the company of a rich young heiress who takes him to her palace (the term is used literally) in her fabulous car. There they encounter two prostitutes. The rich young lady, sensing a common bond with one of these (for as we are made well aware, they are two opposite sides of the same coin) offers to take her home. The contrast between the affluence of the rich and the dismal quarters of the prostitute is driven home cruelly. The more so since the rich young thing, weary no doubt of the boredom of her parasitical existence decides to fornicate with the young man in the prostitutes’ own bed, suffusing herself, as she imagines with the sensuous pleasures of promiscuity. Of the coarseness, the soliciting, the squalor, the pimps, the degradation, she knows—or wants to know—nothing.
Another episode is in an altogether different vein. A little boy and girl claim to have had a vision outside their home and to have spoken to “Our Lady”. The credulity and hysteria which follow lay bare the blind belief and ignorance which go with religion. We see the maimed and crippled gather for succour. Others come out of curiosity, anxious not to miss any possible “modern” miracles. All this is exploited shamelessly by the methods of modern mass communication. The pent-up frenzy and the latent violence that is its accompaniment bursts forth at the end into the immolation and despoilment by the crowd of the tree where the vision is said to have appeared. Symbolic this of the brutality and violence underlying blind faith and belief so characteristic of our time.
Another episode takes us into the palace of a rich aristocrat where a party is taking place. The utter depravity and stupidity of these people are hammered home in scene after scene. Lechery, promiscuity, avidity, inanity are all ruthlessly exposed. We are never allowed for an instant to forget that these people are possessed of enormous wealth and resources. The great disparities of wealth ownership so characteristic of capitalist society are made clear for all to see. These people are portrayed for what they are—useless, parasitic, diseased.
The final orgiastic episode may be said to crown this unsparing condemnation of hypocritical capitalist morality with one code for the poor and one for the rich.
Max Judd