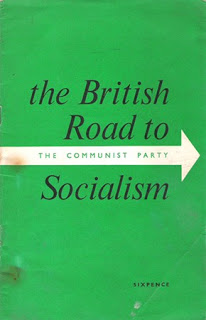 Many people are taken in by the apparently Socialist phrasing used in Communist Party literature. The fact that Moscow publishes some of Marx’s works tends to convince such people that the Russian system is based on Marxism and is building Socialism. Without going any further into the matter, they find it hard to believe that the so-called Communist Party is not genuinely Marxist or Communist in character.
Even people who are opposed to the Communist Party, or who are not interested in politics at all, accept the myth that a basically different system exists in Russia. The propaganda machines of both East and West agree that Russia. China, and their satellites, are Communist. They simply disagree as to its desirability, although it is doubtful whether the ruling class of either side are really so naive.
A careful reading of The British Road to Socialism, the most recent programme of the Communist Party, gives some indication of how utterly confused and muddle-headed that organisation is. They freely’use the term “Socialism,” but their “explanations” betray only too dearly the fact that they have not the vaguest notion of what it means. Having stuck a Socialist label on their State enterprise capitalist programme, they proceed in great detail to show us how different it is from private enterprise capitalism.
The more they elaborate the more familiar becomes the ring of reformism, compromise and collaboration. The capitalist terminology is not disguised, it is blandly called Socialist.
The most important question that arises from the pamphlet is—if this programme were put into effect would it at least be a greater advance towards Socialism than continued Tory and Labour administrations? The answer is an emphatic “NO.“ If the working-class were to support the Communist Party on a programme of State Capitalism, as outlined in the pamphlet and called Socialism, the only result would be disillusionment. In Russia and her Empire all the ugly features of capitalism are clearly to be seen. There is no evidence that state bosses are any better for the working-class than private bosses.
The state is essentially an instrument of class rule and will not exist in a classless society—Socialism. This is a fact which some of the old Bolsheviks knew, but having taken power when historical development was bringing capitalism into being, they turned their backs on it. They have also turned their backs on Marx’s analysis of capitalist society.
As the programme makes repeated references to a “Socialist Government” and a “Socialist Britain” and uses such terms as the “Socialist State” and the “Working-Class State,” it is clearly evident that the so-called Communist Party imagines that nations, states and governments will continue to exist under Socialism. A few quotations will show how capitalism has made them eat their words on the question of the state and how they have adulterated Marxism in order to try and make it support its opposite.
Engels writes in Anti-Duhring:

The modern state, whatever its form, is an essentially capitalist machine; it is the state of the capitalists, the ideal collective body of all capitalists. The more productive forces it takes over as its property, the more citizens it exploits. The workers remain wage-earners, proletarians. The capitalist relationship is not abolished; it is rather pushed to an extreme.

Lenin knew this to be the Marxist view of the stale. In a pamphlet (Lenin and Stalin on the State), for example, he tells us “. . . the State is the product and the manifestation of the irreconcilability of class antagonism. The State arises when, where, and to the extent that class antagonisms cannot be objectively reconciled. And, conversely, the existence of the State proves that the class antagonisms are irreconcilable.” (Page 26).
The truth that the Communist Party of the Soviet Union has all along been the instrument for the building of modern industrial capitalism in Russia can be seen from the wage labour and capital basis of the Russian system. Vishinsky who, unlike many of the old Bolsheviks, died of natural causes, contemptuously stated that the so-called doctrine of the withering away of the State has been a favourite subject of petty-bourgeois chatter about Marxism. “What we want is a strong State with a redoubtable repressive apparatus.” (The Patriotic War of the Soviet Government, published in Moscow, 1944).
It has been necessary to show the true nature of the State in order to make clear the all-important fact that the existence of the State is incompatible with common ownership of the means of production. Common ownership means class-less society, therefore, the absence of the class State or repressive apparatus. Furthermore, it is vital to establish this point because the “Socialist State,” a contradiction in terms, is the central theme and the basic proposition of the so-called Communist Party’s programme.
It follows that the rambling list of reforms which make up the programme to be carried out by a “Communist” government brands them as a purely state-capitalist party.
Although the British Road to Socialism consists of only thirty pages, there are so many fallacies and misconceptions that a hefty volume would be needed to thoroughly deal with each anti-Socialist proposition.
It is suggested, for example, that the Labour Party could join with the Communist Party to establish Socialism in Britain. This, despite the fact that the Labour Party has never stood for Socialism and when in power has run capitalism and been guilty of every anti-working-class act in the book. When in opposition, the Labour Party is obsessed with trying to find a policy that will get them elected to run capitalism again. To talk of a Socialist Britain with a “foreign policy” is to contradict the essential world-wide nature of Socialism, which in a world system there will be no “foreigners.”
To talk of foreign trade is to deny production for use and free access. Distribution according to needs is the basis of Socialism. To talk of trade at all is to talk of the struggle for markets, and rivalry for resources. To talk of trade is to talk of war. To talk of “independence for colonial peoples ” is to propose the setting up of more national states on the lines of home ruled capitalism with still more rivalry. Independence is the cry of the nationalist but it does not end the dependance of the working-class upon wages. Nationalism atomises the world into a number of mutually hostile fragments, where the workers in each fragment line up with their native capitalists. Internationalism expresses the oneness of working-class interest in the struggle to overthrow the wages system and establish the world community of Socialism.
For the Communist Party to talk of “the withdrawal of all armed forces from colonial and dependent territories or occupied spheres of influence and the handing over of sovereignty to governments freely chosen by their peoples,” is hypocrisy in view of the imperialist record of the Soviet Union.
Socialism means the end of the employer to employee relationship, the end of landlord and tenant. Under Socialism there will be no pensions or benefits, which are the hall-marks of poverty under welfare capitalism.
To say that the Communist Party “will raise pensions and benefits for the old, the widows, the disabled and the chronic sick . . .”, is to say they will continue with a system of rich and poor. They promise to provide cheap houses at “a low rent.” Once again, it is only poor people who need low rents. Socialism means no rents because accommodation, like everything else, will be produced solely for use.
To anybody with half an eye the fact that the Communist Party talks of “reduction of mortgage interest charges,” “lower cost of repairs,” “finance,” “lower prices and higher wages,” shows how firmly they are in the grip of the economics of Capitalism.
In the final chapter, another futile effort is made to woo the Labour Party and the co-operative movement. Marx is linked with Lenin (with whom he has less in common than chalk has with cheese), and we find “church organisations” and “business people” listed amongst the “progressive forces” which will “open up the way for the advance to Socialism.”
It is indeed tragic that workers are so easily fooled by names, for even the most rudimentary understanding of Communism will expose the sham of those who are Communist in name alone.
Harry Baldwin